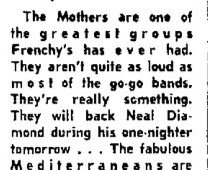 The fact that Frank Zappa and The Mothers played Frenchy’s in Hayward has been alluded to on various chronologies. The new, rather startling piece of information from the ad and listing from the “Here ‘n’ There” entertainment column in the May 20, 1966 edition of The Hayward Daily Review (above) is that The Mothers backed Neil Diamond for a night.

Frenchy’s, at 29097 Mission Boulevard in Hayward, was a popular bar and hangout, attracting people from all over Southern Alameda County (and probably San Jose as well). Most acts played week long engagements—sometimes extended several times—and The Mothers may have played from as early as May 6 (Friday) through Sunday May 23. It was also common for the main band at Frenchy’s to back various singers, a typical arrangement at nightclubs like Frenchy’s at the time. Shortly after this, the Mothers played there infamous weekend at the Fillmore with the Velvet Underground (May 27-28).

Neil Diamond had just hit the charts with “Solitary Man,” and he had been flown out by promoter Bill Quarry to headline a show on Friday night (May 20) at The Rollarena in San Leandro, also backed by a local band (The Spyders). It is not surprising to find out that Diamond also had a Saturday night gig. Since The Rollarena dance appealed to teenagers, and Frenchy’s was a bar, the two gigs did not really compete with each other.

At this time, The Mothers would have recorded their legendary Freak Out album, but it would not be released until about August. The band was known as “The Mothers,” and had already played the Bay Area, most famously at the Family Dog dance at Longshoreman’s Hall on November 6, 1965. A band called “The Mothers,” alluding to a 12-letter swear word, made MGM Records very anxious, and they changed the band’s name to The Mothers Of Invention, but up to this time the group was known as The Mothers., except internally at MGM.

The lineup of The Mothers in May 1966 was probably

possibly Denny Bruce was still the second drummer, along with Black. Zappa did not always appear with the band (this is alluded to on the cover of Freak Out). Since Zappa was not famous, crowds were not necessarily disappointed. Since Freak Out was in the process of being recorded, it seems probable that Zappa may have had to return to Los Angeles for production duties while the Mothers continued their lengthy engagement in Hayward, skipping a few gigs here and there.

Sadly, much as I wish their was a version of “Sweet Caroline” done to the tune of “Who Are The Brain Police,” I am inclined to presume Zappa was not present for the Neil Diamond performance. I can’t imagine Zappa not mining the comedy value for future liner notes or interview fodder. On the other hand, the Mothers were excellent professional musicians (as was Neil Diamond), so however much we imagine a cultural clash the reality is Neil Diamond’s songs were easier to play than Zappa’s, and Neil probably appreciated a professional band. Still, its a remarkable intersection before both Frank Zappa and Neil Diamond's successful careers diverged in different directions.
Posted by Corry342 at 10:38 AM