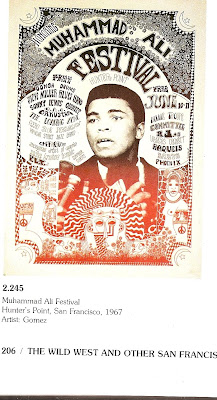 One of the more mysterious events in San Francisco rock history is the "Muhammad Ali Festival," held in the Hunters Point district of San Francisco on June 10-11, 1967. This event is only known to me and my fellow historians from a poster in Paul Grushkin's fine book The Art Of Rock (plate 2.245, p.206, reproduced here). I have never read or heard an account of any band who recalls playing there or people who attended the event, and in fact I can not even be certain that the event occurred. Many surviving sixties posters promote events that were subsequently canceled, or changed dramatically, so the existence of a poster does not remotely insure the event occurred as planned. However, the tantalizing evidence of this poster suggests that whoever planned this festival had something different in mind than the typical Rock Festival in Golden Gate Park, which were common in the first half of 1967.

Since the reproduced poster can be hard to read, I will indicate the facts here. The header says "Muhammad Ali Festival-Hunters Point-Free-June 10-11." Hunters Point was a mostly African-American district of San Francisco, which had grown to prominence during World War 2, as many African Americans moved to San Francisco to work in the Naval Shipyards in Hunters Point (similar to Oakland, Richmond, Marin City and Vallejo). Free rock concerts in San Francisco, of which there were a lot at the time, had hitherto been in Golden Gate Park or nearer Downtown (Union Square, etc), so a free concert in an African American neighborhood was new territory, particularly a two-day event on Saturday and Sunday. Along with a 1969 Synanon Festival in Oakland, this show appears to be one of the very few efforts to merge white rock hippie festivals with the African American community, so whether the show succeeded or not is a much more interesting question than usual.

Muhammad Ali also had a unique status at this time. Besides his enormous status as an athlete (comparable to someone like Shaquille O'Neal), he had refused induction into the US Army as a Conscientious Objector, saying that it went against the teachings of The Koran. His famous remark "I ain't got no quarrel with them Viet Cong" made him a hero to many people who were not boxing fans. In 1964, Ali had changed his name from Cassius Clay, and this alone was unprecedented (most sports headlines still called him Clay), and making his religious beliefs the basis for refusing to be drafted made him a figure much larger than a mere a sports hero. In April, 1967 Ali was arrested for formally refusing his draft notice, and his trial was set for June 20. He was convicted, and although he was not jailed, he was stripped of his heavyweight title and did not box again until 1971. As a result, Ali crystallized opposition to the War, reflecting a man so principled that he gave up money and fame to do it.

Thus an event 10 days before Ali's trial that says "Muhammad Ali Festival" is self-evidently intended as a celebration of racial solidarity and opposition to the Vietnam War. Of course, that would be the hippie interpretation--whether the local community perceived it as supportive or patronizing is unclear. Some of the fine print says "Free Bar B-Q", which in California was effectively code for African Americans, although how black people might have felt out about it was completely unclear. There is also a small map of Hunters Point but I cannot discern the actual place where the festival was held.

No specific organizer or affiliations are identifiable for this event, so it makes me wonder how carefully it was organized. A lot of hippie events were thrown together kind of casually, and they did not always fall together gracefully: bands didn't show up, generators ran out of power, the cops hassled about permits, neighbors complained, and so on. Its impossible to say if this well-intentioned event had a chance of succeeding, much less whether it actually did.

As to the mystery of this event, it happened to take place on a particularly busy rock weekend in the Bay Area. A huge rock festival that was scheduled the previous weekend at Mt. Tamalpais in Marin had been delayed and rescheduled to the weekend of June 10-11. This all day event, featuring groups like The Doors, The Byrds, Jefferson Airplane, Country Joe and The Fish and a couple of dozen others, would have sucked away numerous people who might have considered journeying to Hunters Point. Numerous other people may have been saving up time or money to go to the Monterey Pop Festival the next weekend. Meanwhile, The Doors were at the Fillmore Friday and Saturday night (June 9-10), Big Brother and Canned Heat were at The Avalon all weekend (June 8-11) and Steve Miller Band was headlining California Hall on Friday and Saturday night as well.

The listed performers for this concert were not well known at the time, even if some of them have grown in stature since. The acts listed are:

Steve Miller Blues Band: a great group, but a year shy of their first album, and only known locally. Curley Cook was still on rhythm guitar, as Boz Scaggs would not join until later in the Summer.

The Loading Zone: an Oakland band that played both rock and soul clubs, they too were a year shy of their debut album.

The Charlatans: though Haight Ashbury legends, these pioneers were never actually that popular, and their first album did not come out until much later.

Ulysses Crockett and The Afro Blue Persuasion: Crockett was a Berkeley vibraphonist whose modern jazz sextet played a lot on Haight Street.

Phoenix: A San Francisco group that was still a year shy of their performing peak, although they never got the breaks they needed either.

Anonymous Artists of America: A Santa Cruz Mountains band who lived in a commune

The Committee: Improvisational theater troupe, based on Broadway in North Beach

One of the "acts" says "Gonga Drums", which I take to be an informal drumming group, common in Golden Gate Park and Sproul Plaza, and the Radha Krishna Temple. What the temple was providing isn't clear, although one assumes they all chanted. There are numerous initials, like "B.A.Q," "P.L.T's" and "B.J.", which may be code or who knows what. There are numerous assurances of "Surprise Guests," but of course there is no way of knowing.

To some extent, the fact that this event ended up taking place on a giant rock weekend during the Summer Of Love has pushed it into obscurity. Nonetheless, the poster remains a tantalizing curiosity about an event that was interesting whether it occurred or not.
Posted by Corry342 at 10:59 AM