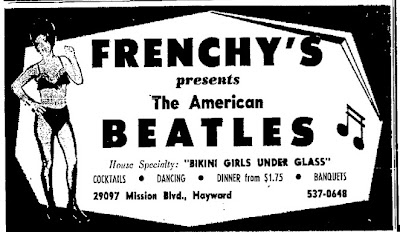 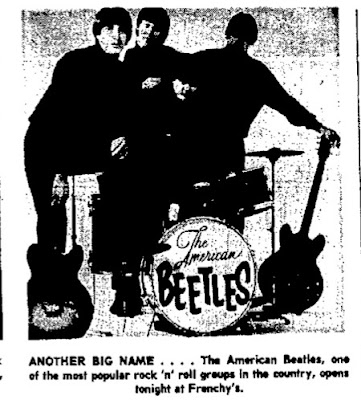 In the first half of 1966, Frenchy's, at 29097 Mission Boulevard in Hayward, was the only rock club between Berkeley and San Jose, and the rock club that was farthest East of San Francisco. Plenty of rock was played at High School dances and "Teen" events, but there were still very few adult rock clubs where drinks were served. Frenchy's was considerably less cool than The Matrix in San Francisco or The Whiskey A-Go-Go in Hollywood, but it was one of the few gigs available for aspiring rock bands. As a result, a review of the shows from Frenchy's in the first half of 1966 reveals an interesting cross-section of rock music.

Hayward, California, while a prosperous suburb, was still a distant enclave in 1966. Neither the freeway network nor public transportation (such as BART) was anywhere near what it was today, so there was considerably less contact with San Francisco, Berkeley or San Jose. Hayward wasn't far from its agricultural roots, and the biggest industry around was the auto plant in nearby Fremont.

Frenchy's dated back to at least 1962 (The Warlocks had played a gig there on June 18, 1965). It seemed to be run on the Whisky A-Go-Go model, with pretty girls dancing on elevated stages to lather everyone up, and bands playing dance music throughout the night. While the drinking age was 21 in California, insuring no teenagers, because food was served 18-year olds could attend in some circumstances (allowing young men to bring even younger dates). Rock music was popular with people in their twenties, but not with older people. Some of the bands who played were clearly cover bands who probably also played Las Vegas type lounges, and some were more original groups, but even the bands playing original material must have played a lot of covers to fill out the evening.

I have compiled the list for the most part from ads in the Hayward Daily Review. The ad and photo above are from the March 18, 1966 edition.

January 7-18, 1966 The Leaves
The Leaves were a popular band on Hollywood's Sunset Strip. The January 7, 1966 edition of the Daily Review said they were proteges of Pat Boone. Did he know their logo was a marijuana leaf? The Leaves were a pretty good band, with two albums and a hit single ("Hey Joe" which they got from The Byrds). Bassist Jim Pons was later in The Turtles and The Mothers of Invention.

Most engagements at Frenchy's were from Friday to Thursday, but The Leaves ended on a Tuesday.

January 19-27, 1966 The Liverpool Five
I don't know anything about this group, but I'll bet they weren't from England. I don't know exactly when their engagement ended, or if another group played at the beginning of February.

January 28-February 6, 1966 The Mojo Men
The Mojo Men were on Autumn Records, the label of KYA-AM dj Tom Donahue (who later founded KSAN-fm). Rather confusingly, another group on Autumn was The Vejtables, featuring the singing girl drummer Jan Errico. When Autumn fell apart in April of 1966, Errico left The Vejtables and joined The Mojo Men, and they had a hit with a Buffalo Springfield song "Sit Down I Think I Love You." At this time, however, The Mojo Men still featured bassist/singer Jim Alaimo.

February 7-17: The Vejtables
The Vejtables, with Jan Errico (Gregg Errico's cousin) on drums and vocals, had played Frenchy's often in the second half of 1965, as had their label mates The Mojo Men.

February 18-March 3, 1966 The Gauchos
The Gauchos were led by one Jim Doval. Based on the advertising, they seem to be a typical Nevada lounge act, probably quite talented in a rock/r&b style but strictly a cover band.

March 18-31, 1966 The American Beetles
How would you like to be in this band? Notice that the drum kit has "Beetles" but the club advertised "American Beatles."

April 15-21, 1966 Peter Lewis with Peter and The Wolves/Linda Carr
Peter Lewis was later in Moby Grape. I have written about this elsewhere.

April 22-28, 1966 The Sons Of Adam/Linda Clark and Randy Meek
In complete contrast to The American Beetles, The Sons Of Adam were the coolest band on the Sunset Strip. Guitarist Randy Holden was a titan, as would soon be proven in The Other Half and Blue Cheer.

April 29-May 5, 1966 The Ashes
The Ashes were a Los Angeles band who played in a folk-rock style. Drummer Spencer Dryden would shortly join the Jefferson Airplane, so there were probably some Airplane people checking him out.

May 6-May 26, 1966 The Mothers
Frank Zappa's band was known as The Mothers. His anxious record company (MGM) added "Of Invention." At this time, they would have mostly recorded Freak Out, but it would not have been released. The ad for May 6 still features The Ashes, but esteemed Zappa gigolist Charles Ulrich is confident that the Mothers gig started on Friday May 6. Ulrich has been in correspondence with Ashes guitarist Alan Brackett, who recalls hanging out with The Mothers as they came into town, so I am inclined to agree with his analysis.

At this time the Mothers lineup would have been

When the Mothers finished their engagement they played The Fillmore on the weekend of May 27-29.

May 21, 1966 Neil Diamond/The Mothers
I have ruminated elsewhere about the cosmic convergence of The Mothers backing Neil Diamond on a Saturday night in Hayward. Charles Ulrich has sound reason to believe that Diamond was backed by just Roy Estrada and Jimmy Carl Black (Diamond was an adequate guitarist), rather than the full band. Diamond, riding high on "Solitary Man", had flown into town to play a gig in San Leandro as well as at Frenchy's.

June 10-23, 1966 WC Fields Electric String Memorial Band
I know nothing about this group, but I note that they have a more whimsical psychedelic name, a sign of changing times regardless of what they played.

June 24-July 6, 1966 The Vejtables
To add to the confusion, when Jan Errico left The Vejtables to join The Mojo Men, The Vejtables continued on. This would have been the post-Errico lineup. They may have featured future Moby Grape bassist Bob Mosley at this time, but I am not certain of his chronology.

This is as much of the Frenchy's gig list as I have been able to determine. Anyone with additional information is encouraged to send it to me or include it in the comments.

After June, Frenchy's mostly featured a group called The Tijauna Rejects, and by late 1966 had gone "topless," heading away from a focus on the music. This had changed by mid-1967 (the ad says 'Topless was a big bust'), but by then Frenchy's was just another rock club in the East Bay.
Posted by Corry342 at 5:46 PM