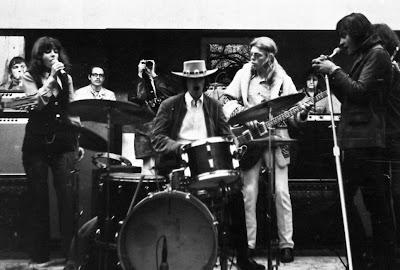 Photograph Copyright of Brian Richards
After a short break following their August 31 performances on the Isle of Wight, Fairport Convention and the Jefferson Airplane were booked to appear on the corrugated iron bandstand on Parliament Hill Fields on the south-east corner of Hampstead Heath in London. Camden Council had organised the event but had failed to adequately promote proceedings. John Peel had mentioned the event on his Top Gear radio show and International Times carried an advertisement.

Nevertheless, only a few hundred showed up, perhaps others were kept away by the persistent rain. Of those who did show up a pocket of post-lemonhead mods/proto-skinheads made their feelings known about the dirty hippies and freaks. Fortunately the rain drove them back to the Bull & Last. Although Sandy Denny was late arriving, Fairport Convention opened proceedings and a partial set list includes Suzanne, Stormy Weather and I'll Keep It With Mine. As an aside, Richard Thompson attended William Ellis School on Parliament Hill close to where they performed.

The Jefferson Airplane played a pretty much standard short set: She Has Funny Cars, Ballad of You and Me and Pooneil, Won't You Try/Saturday Afternoon, It's No Secret, If You Feel, Somebody To Love, Today and returned with White Rabbit as an encore.

Grace Slick and Paul Kantner thanked the audience for standing in the rain and enjoying their set. The long demolished bandstand itself provided shelter for the performers.

Come May 1969 Camden Council had decided to not only allow, but sponsor three more free shows at the Parliament Hill Fields bandstand. The first of these saw a very good crowd of about 8,000 London hippies (including Ladbrook Grove denizens and weekend hippies), casual observers and head-band clad drug squad officers witnessing a strange mix of performances.

Roy Harper opened and was soon followed by Pink Floyd playing a somewhat rushed set (they were booked to play Southampton University later that evening) on Orange equipment that was not proving reliable. The Pink Floyd set was: Astronomy Domine, Set The Controls for the Heart of the Sun. Careful With That Axe Eugene, A Saucerful Of Secrets (shortened version).

Jody Grind (organ, guitar and drums heavy trio) and Pete Brown did what Jody Grind and Pete Brown did, keeping the audience happy but not ecstatic. Poet and Cream lyricist Brown would soon be thrown out of the his own band The Battered Ornaments. Italian experimental band MEV were, reportedly, not well received at all and quickly headed off.

The evening concluded with a set by the Pretty Things with the stage occupied by many of the audience dancing, Twink climbing everything he could climb, Mick Farren and many others.

A reported 16,000 folks turned up to see a rather more laid back afternoon of music under gray clouds and light rain. Previously called Mabel Greer's Toyshop, Yes performed their set which at that time still included covers of Byrds and Beatles numbers and was far from the painful progressiverock that would become their trademark.

Forest were a Grimsby sired folk group that took refuge in the midlands. A favourite of John Peel, they produced two decent albums and are often tagged as part of the acid folkgenre.  By the time of their performance at Parliament Hill, Blossom Toes had drifted from their psychedelic roots demonstrated on their first album (We Are Ever So Clean) to being a pretty much down the line rock band – as capably demonstrated on their second album (If Only For A Moment) released that summer. 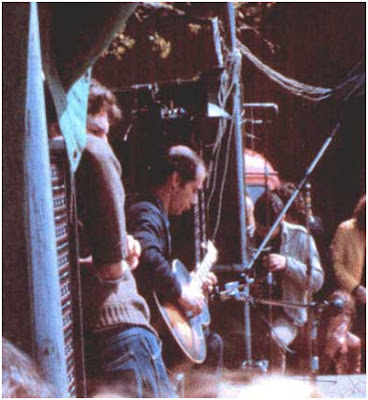 Photograph Copyright of Chris Downes
The Third Ear Band was an evolving musical collective that utilised traditional orchestral instruments in an improvisational manner. At the time of this performance, their Peter Jenner produced album Alchemy was being released (featuring John Peel on Jaws Harp).  The line up for the show was Mel Davis on cello, Glen Sweeney – chimes, tabla and hand drums, Dave Tomlin and Richard Coff playing violins.

John Fahey also played a Roundhouse benefit for Fairport Convention with Al Stewart on May 25. After a May 11 performance at Mothers in Birmingham with Eclection, Fairport Convention’s Martin Lamble died in accident when the van carrying the band crashed on the M1.  Fahey followed the benefit with a Top Gear session for John Peel on May 29.

At the time of the show the Software Machine would have been playing as a four-piece with Robert Wyatt on Drums, Mike Ratledge on keyboards, Hugh Hopper on bass and Brian Hopper on sax.  Procol Harum were still riding high in the States but by mid 1969 there popularity was waning in England. This was the first show in England since the spring of 1968 and one of only half a dozen shows before they would return to North America.

A second stage had been set up to aid the transition between performances.

An all night event attracting a crowd reported to be around 25,000, the show was cut short by serious trouble with the crowd. Skinheads threw bottles, coins and heckled Fleetwood Mac when they came on stage and mobs threatened the audience and bands alike.

Rory Gallagher’s Taste opened the proceedings with their loud and heavy blues-rock set a little after 9PM playing on the second stage. Poet and The One Man Band were a short-lived vehicle for Albert Lee, Jerry Donahue, Pat Donaldson (previously of Dantalian’s Chariot), Pete Gavin andTony Colton most of which would later be involved with Fotheringay and Heads Hands & Feet. They released a couple of decent (or so I recall) albums in the folk rock genre. A story that needs telling.

1969 saw Bridget St John release her, and John Peel’s Dandelion Records’, first album. She played a well received set including Leonard Cohen’s Suzanne and Joni Mitchell’s Night in the City as well as a number of songs of her own.

Duster Bennett was a Welsh country-blues one man band and singer that was always well received live, but never really successful in terms of record sales. Fleetwood Mac had provided the back line on his first album and he went on to produce a couple more for Blue Horizon. There was trouble already brewing when Bennett played but he carried on undeterred.

The Edgar Broughton Band were the mainstays of the British festival scene and continue to play benefits and tour to this day.  The anthem, Out Demons Out, was belted out that night – perhaps antagonising the skinhead demons that were to soon wreck the evening.

A little after midnight, Fleetwood Mac came to the stage and played a couple of numbers including Albatross. Soon after, the evening was bought to a close as the skin heads forced the band off the stage. Peter Green's father was so upset by the events of the evening he wrote to the press to complain:

My son travels all over the country playing to different audiences practically every night and last Friday was one of his nights off. But instead of taking advantage and resting, he offered his services to play for free at an open air concert along with other artists. Everything would have gone off fine, when along came a small group of hoodlums - not I may add, long haired freak , as is their usual description - but a gang of crew-cut young thugs who seemed to delight in spoiling a night out for the vast majority of people who were there to enjoy themselves.

After many nasty incidents the concert had to be abandoned, much to the disgust of the organizers who went to a great deal of trouble to arrange it . It is time sterner measures were taken by the law and stiffer sentences imposed on these so called citizens of the future.

Posted by The Yellow Shark at 8:45 AM No comments: