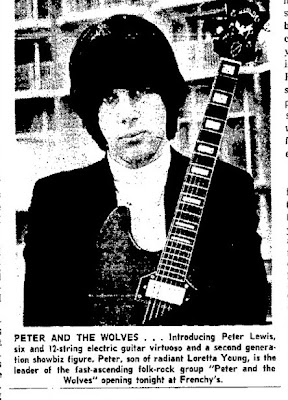 Frenchy's, at 29097 Mission Boulevard in Hayward, was a relatively hip club in a comparatively unhip area. In eary 1966, the rock underground was booming in San Francisco, Hollywood, Greenwich Village and Berkeley, and showing signs of life on college campuses, too. A town like Hayward, however, prosperous but hardly wealthy, not too far from San Francisco or San Jose, was not immune to the changes happening in the culture, but it was still a few steps removed. The only rock club in Hayward, or all of Southern Alameda County for that matter, was Frenchy's. While it featured dancing go-go girls and lounge acts, it also featured some bands that hinted at something else.

This ad and photo from the April 15, 1966 Hayward Daily Review is the only ad I have seen for the group Peter And The Wolves, starring Peter Lewis, some months shy of founding Moby Grape. The photo identifying him as Loretta Young's son guarantees that this is the same Peter Lewis. The band was based in Southern California, and I did not even realize that they had played any Northern California shows.

At this time, all the other members of Moby Grape were in the Bay Area as well, except possibly for Bob Mosley. Jerry Miller and Don Stevenson were in The Frantics, living in the hills of San Bruno and playing South Bay bars, but they would shortly change the name of the band to Luminous Marsh Gas and add a female singer, Denise Kaufman (subsequently of Ace Of Cups). Skip Spence was still drumming in the Jefferson Airplane, although he would leave the band the next month.

Bob Mosley was probably in the Bay Area, working with either the Joel Scott Hill Trio (with Lee Michaels and John Barbata) or The Frantics, but I am not certain of his exact timeline.

I don't know anything about Peter and The Wolves material, or whether or not they played any proto-Moby Grape material, but his photo is still a fascinating snapshot of a changing moment in time. 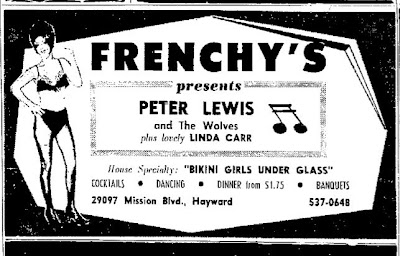