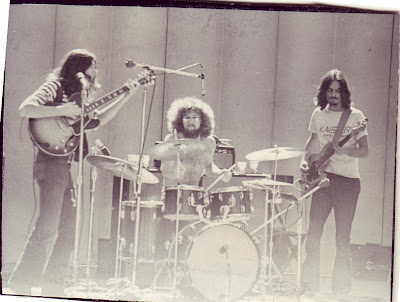 (Guitarist Mark Pearson, drummer Duane 'Motor' Timme and bassist Kootch Trochim of Sanpaku, Frost Amphitheater, Stanford University, Palo Alto, CA Sunday October 5, 1969--h/t Michael Parrish for his great photo)
Sanpaku were originally from Sacramento. Initially called The Working Class, they spent a fabulous Summer in 1968 as the house band at Kings Beach Bowl on Lake Tahoe's North Shore, where they met the Grateful Dead and other bands. Sanpaku played the Tuesday night Fillmore West auditions, where they got heard by Bill Graham and signed to his management company. Well regarded, well connected, friends and jamming partners with groups like The Grateful Dead and Santana, they played numerous shows large and small throughout 1969.

Like many fine bands, however, it didn't happen for Sanpaku. I am compiling their complete performance history here (and the band's own blog is here); thanks to former Palo Alto resident Michael Parrish, however, we have some long ago photos of Sanpaku at Stanford University's, Frost Amphitheater on the sunny Sunday of October 5, 1969, part of a multi-act bill playing a benefit for the MidPeninsula Free University of Palo Alto and Menlo Park. This post--to some extent an excuse to show some great photos--will put some context around the pictures.

The Midpeninsula Free University, known as the MFU or "Free You" was an important part of countercultural intellectual life in the towns around Stanford University in the late 1960s. The MFU was an effort to make higher education relevant and forward looking, rather than traditional and stodgy. It may all seem like underwater basket weaving today, but major Universities like Stanford were quite threatened by efforts to provide an alternative to traditional higher education. Many of the instructors at the Free You had advanced degrees, and in some cases were even Stanford Faculty themselves. The Free You worked out of storefronts in the Palo Alto and Menlo Park downtowns, both near the campus.The story of the MFU is quite interesting, and well outside the scope of this blog, but their own website provides an in-depth history.

The MFU played an important part in South Bay rock history, however, because they regularly sponsored Be-Ins and free concerts at El Camino Park and elsewhere. While initially this was perceived as benign by Palo Alto residents, ultimately the size and scope of the free concerts at El Camino Park created a lot of tension between the MFU and the City of Palo Alto. The issue was only partially political, as Palo Alto has always been a progressive town; rather, Palo Alto has also always been a "hotbed of social rest" (as one writer put it), and the otherwise liberal residents didn't like noise and fuss.

By the end of 1968, the City of Palo Alto had found means to block the MFU from receiving a Permit to hold any more free concerts at El Camino Park, primarily by insisting on enforcing a noise ordnance. An unhappy compromise was reached, where some free outdoor events were held in 1969 at a Softball facility on the opposite side of town (at the Baylands, on 2775 Embarcadero, East of Highway 101). These windy, treeless and relatively distant events satisfied no one. As a result, the MFU decided to hold fundraising benefit concerts at Stanford's Frost Amphitheater. This of course, entailed much philosophizing, since the events weren't free, but they made for good concerts. There were two events, both on Sunday afternoon, the only day the University would allow the venue to be used.

The Sons of Champlin had headlined at least one MFU Be-In at El Camino Park the previous year. Country Weather (from Walnut Creek) and Cold Blood (originally from San Mateo) were popular bands around the Bay Area. All three of those groups had played the Fillmore West a number of times, albeit farther down on the bill. The Congress of Wonders was a trio of hip comedians who had played everywhere in the Bay Area.

Fritz, Old Davis and Sunbear were local bands. Fritz (whose full name was The Fritz Rabyne Memorial Band) were from Menlo Park, and are most famous today for their lead singer Stephanie (Stevie) Nicks and bassist Lindsey Buckingham. Old Davis were from San Mateo, and the next year would hire a teenage guitarist named Neal Schon. 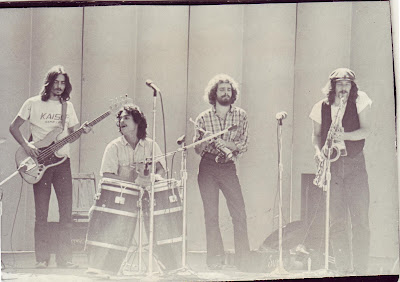 The first MFU benefit was a success, enough so that a second one was held on October 5. The acts were

Michael Bloomfield was a major star from his time in the Butterfield Blues Band and Electric Flag, but he was very erratic and I'm not sure he even showed up. Its A Beautiful Day had been a popular local band for over a year, but they were now riding high behind their debut album and the song "White Bird." Sanpaku and Southern Comfort were popular Bay Area club bands, and Cold Blood and Old Davis returned to play again. With five acts, the show probably went on from noon until at least 6 pm.  We can see from the photos that by modern standards the sound system and other gear was relatively modest. Of course, all the instruments and speakers in the picture would go for spectacular values on eBay today.

Michael Parrish, then a Palo Alto teenager, took photos of many of the acts at this show. Since I am honored to be the official historian of Sanpaku, he scanned his copies (the negatives are lost) and let me post them. He has photos--some from the original negatives--of some of the other acts, and they will be very special indeed. For now, we can enjoy the memories of a fine band on a sunny afternoon long ago. 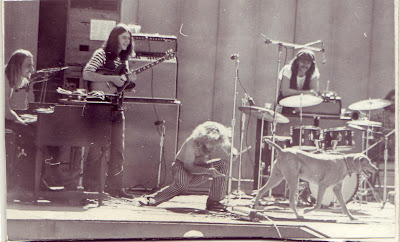 Appendix: Frost Amphitheater, Stanford University, Palo Alto, CA
Frost Amphitheater is a beautiful open air venue, dug out of an artificially constructed hill. 6,900 people can fit inside the grassy, terraced bowl. The Amphitheater was named for Laurence Frost, Stanford class of ’35, who died of polio at age 23. The Amphitheater was first opened in June, 1937, and for many decades was the site of Stanford’s commencement. The amphitheater, near the corner of Galvez and Campus (the entrance is near Laurel Street) rapidly became a treasured venue for music and theater performances.

Stanford University has always been careful about using Frost for too many events. In the 1960s, they limited rock concerts to weekend, afternoon events. A March 5, 1967 show headlined by Jefferson Airplane is the first (that I know of) of the few 60s concerts held there. In the 60s, Frost’s size actually made it too large for most concert attractions, and the University had no financial imperative to attract bigger shows.

In the early 1970, problems with fights and bottle-throwing (specifically at a July 18, 1971 Elvin Bishop/Cold Blood show) caused the University to ban rock concerts at Frost. After a October 1, 1972 show with Miles Davis (nominally a jazz show, although the New Riders Of The Purple Sage were also on the bill) was marred by people trying to get in for free (a breeze for agile locals who knew the grounds well) the University banned all shows at Frost, and all rock concerts moved to nearby Maples Pavilion. By 1975, however, the University relented and started to allow the occasional Sunday afternoon concert, as long as the band drew the “right” sort of crowd (no R&B, no metal, etc). Today, Frost Amphitheater remains a lightly used but extremely popular area venue.