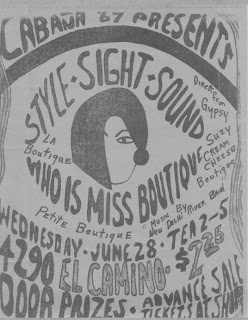 (a flyer for a Wednesday afternoon "hip" fashion show at Palo Alto's Cabana Hyatt House on June 28, 1967, with music by the New Delhi River Band--h/t Ross)

Palo Alto, California, home of Stanford University, played an essential role in 60s music. Palo Alto was the incubator for Ken Kesey's Merry Pranksters and the Grateful Dead, both of whose peculiar missions were transformed by early LSD experiments. Even though many of the seminal events in the early history of the Pranksters and The Dead (nee Warlocks) actually took place in neighboring Menlo Park (including the LSD experiments, at the VA Hospital on Willow Road), it was bohemian downtown Palo Alto that provided the nesting place. When the legendary Trips Festival at Longshoreman's Hall (on January 21, 22 and 23, 1966) exported the South Bay "Acid Tests" to San Francisco, the modern rock show was born. Groups like the Grateful Dead took flight at the Fillmore and Avalon ballrooms, and ad-hoc rock venues had sprung up around the country by 1967.

Despite its status as a "psychedelic start-up" (so to speak), Palo Alto itself was strangely bereft of musical action. When the psychedelic scene took root in the Haight Ashbury, the Grateful Dead and  others relocated to San Francisco. One participant at the time told me that the whole Palo Alto bohemian scene was a few dozen people, not counting Kesey's crowd, so it didn't take much to scatter the crew. Those who did not find urban San Francisco appealing found the then largely deserted Santa Cruz Mountains more hospitable. As a result, while progressive Palo Alto was considerably more friendly to long hair, protesters and loud music than most other South Bay towns, there were few actual hippies to provide the economic basis for a rock venue.

Palo Alto did have its own leading psychedelic band, The New Delhi River Band. The group had formed in June 1966, out of what was left of a folk rock band called Bethlehem Exit, which had been based in the Los Altos/Cupertino area just South of Palo Alto. The New Delhi River Band was based at a house on Channing Avenue (between Waverley and Cowper) in Palo Alto. Today, the New Delhi River Band is only known, if at all, as the first rock band for future New Riders Of The Purple Sage David Nelson and Dave Torbert. Although no recordings are known to survive, they played Butterfield-style blues, with a touch of R&B thrown in: typical sets apparently included "Young Blood" and "Suzie Q" along with Muddy Waters classics. The lineup of The New Delhi River Band (up until its final incarnation) was
Sultzbach had founded Bethlehem Exit in 1965, Tomasi and Herold had joined the group by 1966. David Nelson was living at the Channing Avenue house, on hiatus from playing bluegrass (foregoing the riches therein), and jammed with the Bethlehem Exit members. After an initial bass player did not pass muster at rehearsal (he was a converted guitarist), Dave Torbert was brought in. 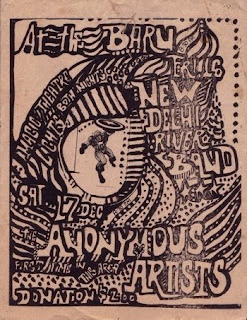 I am working on the complete history of The New Delhi River Band--and quite a history it will be--but the shortest version is that by September 1966, the group was the house band at a remarkable place called The Barn in Scotts Valley, in the Santa Cruz Mountains. There were many hip, rocking bands in the South Bay in 1966 (such as The Chocolate Watch Band), but whatever the personal proclivities of the musicians, their audiences were more teenage and radio-oriented. In the Fall of 1966, outside of the Fillmore, the Avalon and near the Berkeley campus, there was no other place for older long hairs to congregate and hear their own music. The Barn put on shows just about every weekend from mid 1966 through April 1967, and hippies (and bikers and musicians) from all over the Bay Area went there.

Since the New Delhi River Band seems to have played at The Barn almost every weekend in Fall 1966 (the poster here features the NDRB on Friday, December 16, with the Anonymous Artists of America appearing the next night), sometimes multiple times, and regularly in early 1967 as well, they were a well known band in the tiny circles of the Bay Area underground. People in the extended "families" of the Family Dog or The Grateful Dead (albeit not the busy band members themselves) were regulars at The Barn, since there were few other places to go without drawing the unwelcome attention of the police or local yahoos. As a result, by mid-1967 the New Delhi River Band were regularly headlining concerts in San Jose and around the South Bay. These were modest venues, admittedly, but the NDRB was the cool underground band for the area, and they were based in Palo Alto.

To my knowledge, however, the mid-week fashion show on June 28, 1967 was the first paying gig in Palo Alto for the New Delhi River Band. The Grateful Dead had moved North at the first whiff of opportunity, but the NDRB had chosen to stay home. With The Barn closed in April of 1967, due to constant harassment from the Santa Cruz County Sheriff, the group lost their principal place to play. Although The Barn would reopen intermittently from June of 1967 through mid-1968, it stopped being a useful paying venue for a working band. The New Delhi River Band was thus left in the South Bay without an anchor venue.

The Cabana Hyatt House, 4290 El Camino Real, Palo Alto, CA
Palo Alto had been conceived by Leland Stanford as a sleepy college town, and it generally lived up to its founder's goals. Thus it was surprising when hotelier Jay Sarno opened the opulent Cabana Hotel in 1962 as a sumptuous luxury hotel in Palo Alto, 4 miles South of Downtown, near the Los Altos border. The wife of one of the investors said "Who's going to stay at a hotel like that in Palo Alto--and without gambling?"This initial prognosis turned out to be correct, but for a few years the hotel was a glittering swan in the Palo Alto Duck Pond. The Cabana Hotel's lasting fame in Palo Alto history came when the Beatles stayed overnight on August 31, 1965, prior to playing the Cow Palace. Room 810 is still designated the "Beatles Room" in the current hotel (although I have to assume all the band members got their own rooms).

In 1966, Sarno used the design of the Cabana Hotel as the basis for his new Las Vegas Casino, called Caesar's Palace. The garish, theme-oriented Caesar's was a pioneer establishment in modern Las Vegas for a luxurious gambling resort. Many of those elements could be seen at the Cabana Hotel, such as huge chandeliers, giant fountains and an upscale lounge with the name "Nero's Nook." By 1967, however, the Cabana had become the Cabana Hyatt House. The theme of elegance was maintained, but Sarno had already moved to Vegas, where such opulence belonged. Nonetheless, the Cabana Hyatt House was the Peninsula's "best" hotel, a regular site for debutante balls and Society fundraisers.

In California, at least, the confluence of the Fillmore and Swinging London had made Carnaby Street fashions stylish, at least for younger women. I assume that the boutiques (dress shops) advertised for the fashion show were smaller places on the Peninsula, but the names and the Wednesday afternoon "Tea" seem directed at the older daughters and younger wives of the Fashionable set in the South Bay. (I'm particularly curious about the Suzy Creamcheese Boutique).

On the Saturday prior to the 'Who Is Miss Boutique' show, the Grateful Dead and Big Brother and The Holding Company had headlined a Be-In at Palo Alto's El Camino Park (on June 24, 1967). The Be-in was well attended and went off without any problems, a sign of Palo Alto's benign tolerance. I have to assume that the members of the New Delhi River Band were present at The Be-In, not least since Nelson was old friends with both Jerry Garcia and Big Brother's Peter Albin. [update: I have since found out that the Be-In was four days after this event, on July 2, and that the NDRB played the event]. Four days later the NDRB would have found themselves at Palo Alto's most fashionable hotel, playing loud electric blues for pretty young women in miniskirts, all eating tea and sandwiches.

I have to wonder which event was stranger for Nelson and his bandmates: native sons of the South Bay--most of the Grateful Dead and Peter Albin of Big Brother--headlining a comparatively large outdoor concert as local heroes? Or finding the New Delhi River Band cool enough to lend some hip credence to a Society fashion show for young women who might not typically give a scruffy hippie blues band the time of day?

The former Cabana Hotel and Cabana Hyatt House is now the Crowne Plaza Hotel.
Posted by Corry342 at 10:30 AM