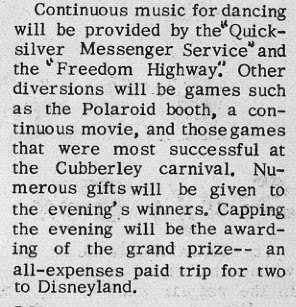 Many High Schools, if not most of them, have some sort of story about some long ago Prom Night or Graduation Dance where the coolest band in town played, right before they got big. Most of these stories get told and re-told until they become impossibly distorted, and efforts to discover the truth reveal a much more mundane reality. The narrative of every High School is always that it used to be much cooler, when in fact the experience of High School changes very little for those people in it.

Nonetheless, once in a while these stories turn out to have a grain of truth to them, and once in a very great while they turn out to be very much true. One of those tales is the Spring 1967 entertainment calendar for Elwood P. Cubberley High School, at 4000 Middlefield Road in Palo Alto. The San Francisco Bay Area was the center of the musical universe going into the Summer Of Love, but all the rising bands were still broke. Rock concerts were not yet big business, and rock music was still seen as directed at the young. As a result, all sorts of bands would play a High School if they were available, because they needed the cash and their management believed (with some justification) that the hippest audiences were actually still in High School. 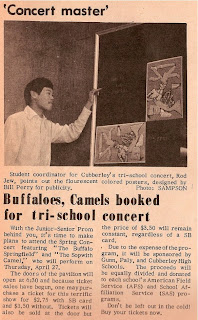 In 1967, Palo Alto was a booming suburb. Cubberley High School had only opened in 1956, joining Palo Alto High School, which dated back to 1898, yet the city still had to open a third high school (Gunn) in 1964 to accomodate the explosive growth of the Baby Boom teenagers. In the Spring of 1967, all three schools booked a concert for their collective student bodies. With such financial clout, they were able to get an actual Fillmore headline band as well as a group with a hit single to their names. Since the concert was on Thursday night, groups like Buffalo Springfield and Sopwith Camel would not typically have gigs, so a paying concert was found money.

Bufalo Springfield were riding high on the hit single "For What Its Worth" as well as their debut album. In concerts, the twin lead guitars of Neil Young and Stephen Stills along with bassist Bruce Palmer matched the musical excellence of any of the Fillmore bands. Sopwith Camel had been an original San Francisco band, although they had been signed by the Lovin Spoonful's producer, long before their contemporaries, and had an album on Kama Sutra and a modest hit single in "Hello Hello." The surprising part of this show was not that it was held, by why so few High Schools in 1967, at least in the Bay Area, didn't take advantage of the abundant musical talent available.  The fact was that while California parents (at least) had grudgingly accepted The Beatles as fine young lads, they were still suspicious of long haired hippies singing about drugs and rebellion. Cubberley High School, however, was a rather different place.

Cubberley High School
Palo Alto itself had a strange history. Originally, railroad magnate Leland Stanford had wanted to found a University in the town of Mayfield, but only if the notoriously rowdy community would agree to close all of its saloons. Not surprisingly, Mayfield refused, so Stanford and a partner (Timothy Hopkins) bought up all the land just North of Mayfield and invented the town of Palo Alto. Palo Alto was founded in 1887 as a University town that did not allow drinking, and so it was a town that was erudite yet stiff. Mayfield continued on its merry way, but come Prohibition the saloons closed anyway, and after 1925 Mayfield was grudgingly annexed to Palo Alto.

Palo Alto High School had been founded in 1898, and in 1925 it had moved to its current site across from the Stanford Football Stadium (on Embarcadero and El Camino Real). Mayfield's own High School had closed so that the Schools could merge (amusingly, Mayfield School became the Palo Alto Continuation School, a faint trace of the rowdy Mayfield legacy). Palo Alto had two downtowns, its own on University Avenue (site of The Tangent and The Poppycock) and another on California Avenue, in the former Mayfield (the future site of The Keystone Palo Alto).

After World War 2, Palo Alto expanded enormously, as did many California suburbs. Cubberley High School was opened in 1956 in the Southern part of Palo Alto (at 4000 Middlefield). South and North (old) Palo Alto were always in competition with each other, and while the history of Mayfield was largely forgotten, the tentacles of the old rivalry was re-enacted in the differences between the two sides of town and the High Schools. By the late 1960s, Cubberley, in South Palo Alto, had the reputation as an edgy, interesting High School, which even the ever-smug Paly students would concede (Gunn, which had only opened in 1964, and located in Southwest Palo Alto, did not have much of a profile at this time).

By the mid-1960s, Palo Alto itself, while dull, was populated by well-educated progressive parents who were opposed to the Vietnam War, nuclear proliferation and racial discrimination. As a result, while most Palo Alto parents had little interest in drugs, free love or rock music, they didn't find them to be scary concepts. Thus, when their own kids were interested in underground rock bands that played the Fillmore, Palo Alto parents were not as threatened as those in other communities, even if the parents themselves were still just middle-class suburbanites. By whatever means it was conceived that there should be a rock concert for all three Palo Alto High Schools, parents would have been cheerily indifferent instead of threatened by long haired rock bands singing about rebellion (as in "Stop/Children, what's that sound/Everybody looks what's going down"). Cubberley would have been the obvious location, as Paly and Gunn were too Northerly and Southerly, respectively, and Cubberley's edgy Mayfield tradition, however sublimated, made it a receptive host.

The posters for the Buffalo Springfield/Sopwith Camel, designed by Bill Perry, have circulated over the years. The attendance for the show seems to have been limited to High School students, although it may not have been limited only to Palo Alto students (I know a contemporary Woodside High School student who went). In any case, it would have been a somewhat different environment than the Fillmore, with a much earlier starting and ending time than a City show. At the same time, the bands would have been accessible to a lot of teenagers who lacked the wherewithal (or permission) to get to San Francisco.

June 16, 1967 Graduation Dance, Cubberley High School, Palo Alto, CA: Quicksilver Messenger Service/Freedom Highway
As a result of Bill Perry's poster, there is some consciousness of the Buffalo Springfield show, and it appears on various Neil Young chronologies. Quicksilver Messenger Service's appearance at the Cubberley Graduation Dance for the Class of '67 falls into the category of Urban Legend (according to one Cubberley grad, at least) but in fact it is a true story. At least one copy of the program even circulates for sale on eBay on occasion. Nonetheless, the article from the June 9, 1967 Catamount confirms the fact.

Quicksilver Messenger Service were established Fillmore and Avalon headliners by mid-1967. They had attracted plenty of attention from record companies, but they had kept their distance, which only added to their underground cool. The group at the time was a five-piece, and all the members (John Cipollina, Gary Duncan, Jimmy Murray, David Freiberg and Greg Elmore) were handsome, stylish hippies, so the band was popular with girls as well as boys, not the case with some of the less attractive bands around at the time.

The Friday night graduation dance wasn't Quicksilver's only gig for the weekend--they were booked at the legendary Monterey Pop Festival the next night. Indeed, Quicksilver would spend the weekend jamming with the Grateful Dead and others at the free stage at Monterey Peninsula College, when they weren't playing their brief, incandescent set at the Festival. A song from Quicksilver Messenger Service's performance at Monterey Pop is accessible on the current DVD version of the Pennebaker documentary, and they were a powerful band indeed. Grad night is a big deal for most attendees under any circumstance, but with a classic band approaching the apex of their powers, it must have been some night (openers Freedom Highway were a younger San Francisco band associated with Quicksilver's management).

The key point about Quicksilver's graduation night appearance at Cubberley is not so much that they played, but that they played six weeks after a high profile Fillmore-style concert and the parents of the graduating Seniors were apparently okay with it. This was in distinct contrast to many sixties sagas wherein shrewd teenagers slip a popular underground or psychedelic band into a Civic or School Auditorium, the aftermath of which was a ban on such performers going forward.

However, while there are a few eyewitness accounts of the Buffalo Springfield show at Cubberley, I know of no eyewitness description of Quicksilver's Graduation Dance performance.  No doubt it was memorable, but as attendance was limited to graduates and their dates, the prospect of a First Kiss, a Last Dance and Old Friends probably made even the mighty Quicksilver seem like part of the scenery. Still, it must have been odd eleven months later, as those who attended the show found themselves in College or Vietnam (the two main choices for young men at the time) and heard "Pride Of Man" or "Gold and Silver" and thought "hey--those guys played my graduation!" 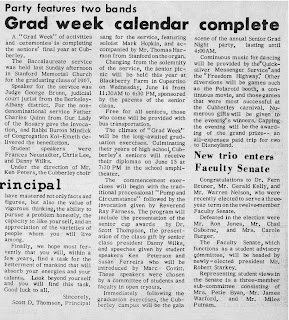 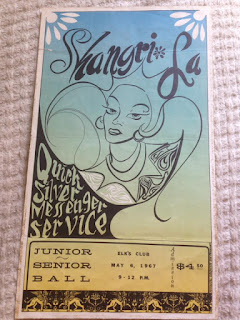 May 6, 1967 "Shangri-La" Junior/Senior Ball, Elks Lodge: Quicksilver Messenger Service
[update] A recent TRPS Facebook entry presented this unknown flyer (h/t D Sullivan). Someone's father snagged this in Palo Alto in 1967. The Elks Club in Palo Alto was at 4249 El Camino Real, far down in South Palo Alto. Presumably this was a Senior Prom, but for now it is not clear for which High School. One Paly graduate recalls that the class of '67 had their Prom at Elks, but that's no guarantee that this was the same event. Elks Lodge is near Gunn High School.

It may be that the crowd at the Prom, for whichever school, didn't really know who Quicksilver were. The jocks went to Prom, not the hippies.

June 23, 1967 Gunn High School: Country Joe and The Fish
I do not think this was the Graduation dance. This concert at Gunn appears to have been the Friday night after school closed, although if some attendee or graduate wants to set me straight I would be very interested. Gunn (at 780 Arastradero Road) had the newest gym, but it was rarely used for public events to my knowledge. [update] Apparently a series of summer rock concerts were held at Gunn.

I do not know who performed at Gunn's '68 Grad night party.

June 10, 1969 Gym, Palo Alto High School: Santana
Paly's 1969 graduation had Santana, two months before Woodstock, but after they had begun recording their classic first album. This was the event in Paly's history that no class could ever top. Paly had the oldest facility at the time, so its not surprising it was not widely used for public events, compared to the newer High Schools.

June 10, 1969 Frontier Village: Cold Blood
According to the June 5, 1969 Catamount, Cubberley High's Newspaper, Cubberley and Gunn held a joint Graduation Dance at Frontier Village, featuring Cold Blood. The joint Grad Dance appears to be due to poor attendance, a very 60s phenomenon. This is worth noting, however, since it suggests that considerably fewer people saw Santana's performance at Paly than have claimed to do so.

I do not know what bands played the 1967-68-69 graduation dances, other than the ones mentioned here. Any Palo Alto residents who can fill me in would be greatly appreciated.