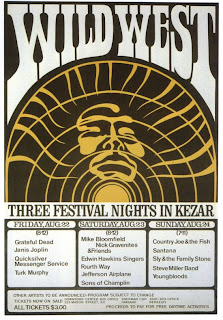 The Summer of 1969 was the Summer of Rock Festivals. Woodstock was the most famous, but every region had a major outdoor event of some kind or another featuring numerous bands over a period of days. Ironically, San Francisco, the City where the 1967 Human Be-In inaugurated the idea of an outdoor rock festival as a collective celebration, had its giant outdoor event canceled at the last second. This cancellation was one of the catalysts of the Altamont concert four months later (on December 6, 1969). Ironically, the characterization of Altamont as a symbolic "Anti-Woodstock" has caused foggy notions about the Wild West Festival and complete amnesia about the concerts that took place in its stead at Fillmore West and The Family Dog On The Great Highway.
The Wild West Festival: A Brief Overview
Most 1969 Rock Festivals were on the "muddy field" model, either on an empty farm or an isolated auto racing track, with music running 16 to 24 hours a day, overnight camping and general madness. All of these events were marked (if not marred) by the attendant isolation, lack of facilities, lack of food and water attendant on packing tens of thousands of people in a place not equipped for it. Many of the events effectively turned into free concerts when security broke down.
Despite the shaky footing of all these events, all the major touring bands played at least one if not several festivals in late 1968 and throughout 1969. The San Francisco bands in particular were mainstays of these events. Thus it only seemed appropriate that the big event planned for San Francisco would be a unique and forward looking event that would set the City apart from other places, always a desirable result in Northern California.
Among the distinguishing characteristics of the plan for the Wild West Festival were the following:
In 1969, only San Francisco had the musical firepower to have 10 headline acts that were hometown heroes, all of them willing to take the gig for a comparatively reduced fee, possibly as little as just expenses. Every other Festival imported acts from America and England, particularly San Francisco, but San Francisco had no need for recourse to elsewhere. According to the poster, the scheduled acts for the events in Kezar Stadium (itself located in Golden Gate Park) were
There were 10 ballroom headliners amongst these acts. Amongst the acts included for "diversity," Oakland's Gospel group The Edwin Hawkins Singers had had big hit with "Oh Happy Day," Turk Murphy's group was the leading Dixieland band, and The Fourth Way were an electric jazz-rock group.
All of the major acts were in the midst of ferocious Summer touring schedules, and were prepared to go well out of their way to make the hometown event. Six of the bands had been at Woodstock the weekend before, on the opposite Coast. If the Wild West had gone off as planned, The Grateful Dead, for example, were in between gigs in Seattle (Wed Aug 20) and Oregon (Saturday Aug 23), and would have had to fly in and out for the Friday night show. Janis Joplin was on the East Coast, and had a Saturday night show (Aug 23) in New Jersey (at Asbury Park) but had promised to fly in to headline Friday night. Country Joe and The Fish had a weekend gig in Chicago, Santana would have just finished three nights in Boston, and both would have had to race back to play Sunday night, but none of the bands were going to miss out on this.
It was not to be. The Wild West Festival collapsed amongst the insistence of too many parties that the show should be free, while others, particularly Bill Graham, pointed out that appropriate sound, lights and security were not at all free. When it all collapsed the week before the event, there was a wave of public hostility throughout the San Francisco hip community, mostly directed at Bill Graham, who in turn publicly threatened to close the Fillmore West and quit the rock business altogether. Whatever the Summer Of Love had been, free concerts in Golden Gate Park were not viable. The City of San Francisco, for its part, was plainly relieved that no such mammoth event occurred in the City limits, and made sure to refuse every permit for a major outdoor concert in the Park for the next 22 years. Ironically, the ban was lifted in 1991 to allow a free concert honoring Bill Graham after his untimely death.
The Wild West "Makeup" Concerts
Amidst all the bad feelings, the week after Woodstock there was a giant hole in the San Francisco concert calendar. The Fillmore West and Family Dog had not booked concerts for the weekend, expecting that their staff, performers and audiences would all be in Golden Gate Park. While some bands, like The Dead, Janis and Santana, had their travel schedules simplified, many of the local bands found an empty weekend date on their calendars. Various other parties who had committed funds to planning the Wild West event, particularly Chet Helms, were left in a difficult financial situation, accenting Graham's point that free concerts weren't free at all.

The solution to this void was very San Francisco: empty ballrooms, available bands and audiences with nothing to do equaled a prime opportunity to have some big rock concerts on a moment's notice. These shows were billed as fundraisers for the Wild West organizers, but exactly who profited from them isn't clear, and I'm not certain whether or to what extent the bands got paid. Nonetheless, there were some interesting rock concerts, and they are usually left completely out of Fillmore West chronologies because they do not have posters that are part of the BGP series. Thanks to Ralph J Gleason's column in the San Francisco Chronicle on Monday, August 25 (excerpted below), and a few other peripheral sources, I have some idea of what happened, so I will summarize these lost events here.


The Wild West, driven into the ballrooms this weekend by its enemies, still managed to present an absolutely beautiful grouping of bands, for some of the most interesting rock the city has known.

Friday August 22, 1969 Fillmore West
Quicksilver Messenger Service/The Youngbloods/Ace Of Cups/Womb/The Fourth Way/The Committee
This show was described in some detail by then-teenage diarist Faren Miller (accessible to determined googlers). Quicksilver, largely invisible in concert in 1969, made the public debut of their new lineup, with pianist Nicky Hopkins effectively in place of Gary Duncan. The Youngbloods were riding a wave of popularity at the time because of the hit re-release of their single "Get Together." The Ace Of Cups, Womb and The Fourth Way were popular bands in local clubs, and The Committee was a popular counterculture Improv troupe. 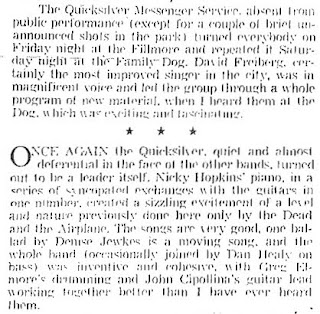 Saturday, August 23, 1969 Family Dog At The Great Highway
Quicksilver Messenger Service/Sons Of Champlin/Jimmy Witherspoon/Anonymous Artists of America
Gleason writes in some detail about the Quicksilver performance Saturday night at the Family Dog. He makes some interesting points in passing: apparently Quicksilver played a few hitherto unknown stealth gigs in Golden Gate Park. Gleason also observes that Dan Healy plays occasional bass, presumably to free up Freiberg to sing (Miller made the same observation about the night before). Healy was Quicksilver's engineer, and he had recently left his job as the Grateful Dead's soundman, a job to which he would return in a few years. This seems to have been Healy's only stab at sustained performance until his own Healy-Treece Band that began in 1979. The "Denise Jewkes" referred to is the married name of Ace Of Cups member Denise Kaufman, who wrote some songs used on the Shady Grove album.

Jimmy Witherspoon, an Oakland-based blues singer, seems to have been backed by The Sons Of Champlin. The comparatively unheralded Sons were among the very best musicians on the Fillmore scene, and could play authoritatively in any style. The Anonymous Artists of America, by contrast, originally a Santa Cruz Mountains band, had a reputation for being fun yet sloppy, so when  Gleason says they "surprised me by the way they swung," it is because they had not done so in the past. From what I know, they had moved to San Francisco and got a hot young drummer from Texas (Richard somtehing), so that probably improved matters.
Saturday, August 23, Fillmore West
Jefferson Airplane/Aum/Los Flamencos De Santa Lucia 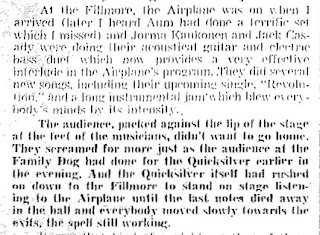 Gleason heads across town to the Fillmore West on Saturday night to catch the Jefferson Airplane. One of the most interesting points is that Gleason says

the Airplane was on when I arrived...and Jorma Kaukonen and Jack Casady were doing their acoustical guitar and electric bass duet which now provides a very effective interlude in the Airplane's program.

Just a few weeks later, Jack and Jorma would record their first album as a duo at Berkeley's New Orleans House, dubbing their band Hot Tuna, but at this time it did not yet have a name. Jorma and Jack had played around The Matrix and elsewhere in 1969, but the name Hot Tuna was invented for the record.
Gleason goes on to describe Quicksilver, having finished their set at Family Dog, stopping by the Fillmore West to hear the Airplane. While its a fact that the Fillmore West was on the way home to Marin, the band still had no obligation to stop and hang out, yet it was a sign of the vitality of the scene that the bands were still friends and enjoyed socializing, a fact of life that would slowly fade away over the next few years.
Sunday August 24 Fillmore West
Country Joe and The Fish/Its A Beautiful Day/Sons Of Champlin
This is the show about which I know the least. Country Joe and The Fish had played Woodstock the weekend before, and then had a weekend gig (Aug 22 and 23) in Chicago at the Kinetic Playground. They too would have had to fly in for the show, but other than that I don't know anything about it. Its A Beautiful Day had just released their extremely popular first album (with "White Bird" and other classics) and were rapidly rising out of the "local band" category.
The Wild West Festival is a lost San Francisco event, although given the ambitious and unrealistic plans for the event, it probably would have been a debacle. Of course, if there had been a public debacle in San Francisco in August, the Grateful Dead and The Rolling Stones would probably have not concocted a scheme to put on a huge San Francisco Bay Area rock concert, and the Altamont mess might have been avoided. But without Altamont, of course, what would have stood as the official ending to the 1960s?
Lost in these events are some fine concerts in San Francisco by some of the best exponents of the rock music of the City. Since the hastily scheduled events lacked posters, they are not part of typical chronologies, even though by Gleason's (and Faren Miller's) account they were a memorable musical weekend in San Francisco.
Posted by Corry342 at 4:32 PM