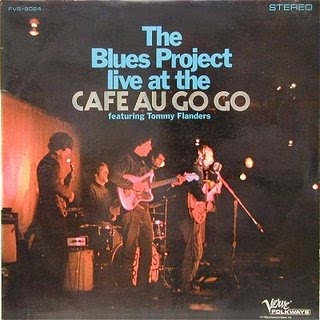 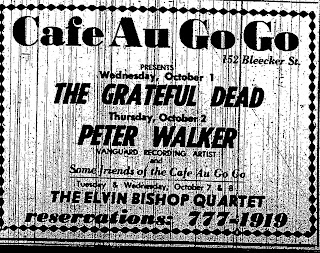 
The Cafe Au Go Go had been closed at the end of June 1969, as Howard Solomon had sold the club. Apparently he moved to Florida to manage Fred Neil. I'm not sure who ran the Cafe Au Go Go for the Fall of 1969, but there was a brief effort to make it a competitive rock club again. We are missing numerous dates, mainly due to missing ads in the Village Voice. Its hard to be certain how things we're really going, but I'm presenting the information as we have it.

update: thanks to a correspondent, a Rolling Stone article about the closure of the Cafe Au Go Go (below) tells us that the new owner was one Moses Baruch, who added singer Richie Havens as a partner. There are some contradictions between what the article says and who was actually advertised. The article suggests that the Au Go Go was closed from June to September, when in fact it seems to have re-opened in July.

July 15-21, 1969 Budddy Miles Express/Uncle Dirty
The Buddy Miles Express had been formed by the drummer in late 1968 after The Electric Flag had disintegrated following the departures of Mike Bloomfield and Nick Gravenites.

August 15-21, 1969 Tyrannosaurus Rex
Tyrannosaurus Rex was a hippie folkie duo featuring guitarist/singer Marc Bolan and Steve ‘Peregrine’ Took on bongos and congas. They were very different than the gritty glam rock machine Bolan would lead in the 70s, known for the hit single “Bang A Gong.” This was part of Tyrannosaurus Rex’s brief American tour, supporting their 3rd album, Beard Of Stars.

The Holy Modal Rounders were from the Lower East Side, and were primarily an Acid Folk duo, featuring Steve Weber and Peter Stampfel. They are credited as the first musicians to release a song with the word “psychedelic” in it (in 1964!). They had released 4 albums by this time, not counting their stints as members of The Fugs, their most recent being 1968’s The Moray Eels Eat The Holy Modal Rounders. By this time, they were sort of a folk-rock group—an acid folk-rock group—but the exact configuration of the group for these gigs is unknown. The pair have continued to record intermittently as the Holy Modal Rounders through at least 2006.

Eric Mercury was a black R&B singer from Canada, who moved to Chicago in the late 60s. He was probably promoting his Avco Embassy album Electric Black Man.

September 29-October 1, 1969 Grateful Dead
It seems odd that the Dead would play a venue as small as the Au Go Go, but the Dead on the road would fill any open night with a gig (and perhaps there had been a latent favor with former booker Barry Imhoff?). Tapes exist, so the shows definitely happened, and the Dead were at their ripping '69 best.
Update: an eyewitness reports that there were different opening acts each night: Eric Mercury, Lonnie Mack and the Holy Modal Rounders, although the precise order is forgotten. The Dead played early and late shows. There was so little room on the stage that Pigpen's congas were set up out in the audience.

October 2, 1969 Peter Walker
Billed as “Peter Walker and some friends of the Café Au Go Go.”

October 7-8-9, 1969 Elvin Bishop Quartet
Elvin Bishop had moved to San Francisco after he quit the Butterfield Blues Band in Fall 1968. By mid-1969, he was managed by Bill Graham’s Millard Agency, one of whose agents (Barry Imhoff) was the former booker for the Au Go Go. By this time, Bishop had released his debut album on Epic (The Elvin Bishop Group). The band had Bishop on lead guitar and vocals, Art Stavro on bass, John Chambers on drums and Applejack (Jack Walrath) on harmonica. Bishop had just debuted at the Fillmore East the previous weekend (Oct 3-4).

October 9-12, 1969 The McCoys/Waldrop and Roundtree/Blues Project II with Danny Kalb
The McCoys featured brothers Rick and Randy Zehringer, from Indiana. The band had had a hit with “Hang On Sloopy,” but the group were largely embarrassed by it. They had moved to New York, where they were managed by local promoter Steve Paul (proprietor of the midtown club The Scene, among other things). The band had “gone psychedelic” with their 1969 album Human Ball, but it was very difficult to be seen as anything other than a “Top 40” group.

In 1970, Steve Paul teamed the McCoys up with another of his clients, Johnny Winter, and formed the group Johnny Winter And. The cruelly underrated 1971 album of the same name featured the original recording of “Rock And Roll Hoochie Koo”, written by guitarist Zehringer (who by then was known by his Nom Du Rock Rick Derringer)

October 13, 1969  Benefit for Billy Cheeseboro with John Mayall, Tim Hardin and many friends
I do not know who Billy Cheeseboro was. John Mayall was apparently touring around the East Coast at the time (he played Fillmore East on Oct 3-4), so he was probably expected to just make an appearance, rather than bring his entire band.

The Café Au Go Go seems to have closed soon after this, and this chapter of rock in Greenwich Village came to an end.  It is fitting that the rock era at the Au Go Go began with the Paul Butterfield Blues Band in July 1965, and a member of that original group closed the club.

Scheduled shows in November that were never played included Santana and Jack Cassidy [sic] and Friends (the fledgling Hot Tuna). update: According to a Rolling Stone article from the December 27, 1969 issue (p.14--h/t Iver)


Rock & Roll Offed At Café Au Go Go
New York – The Café Au Go Go in Greenwich Village is no more.  In its place is the Café Caliph, serving up Middle Eastern entertainment and fare.
The decision to drop the rock was made by club owner Moses Baruch who bought the lease from Maidmen Realty Inc., after original owner Howard Solomon left New York last June for Coconut Grove, Floriday, to manage Fred Neil.
“I took over the club to run it the same way as a jazz club, but for rock and roll,” says Baruch.  “I put in a couple of big groups like the Grateful Dead but I couldn’t make a go of it.  I tried to do it and even took in Richie Havens as a partner.  But it’s impossible.
“The big groups go to the Fillmore East and personally, if I wanted to see them I’d rather go there since you see a show and it’s not too expensive.  I just can’t cover the costs.”
The club was closed from June to September when it re-opened with a benefit headlining Blood, Sweat and Tears.  Havens wanted to turn the Au Go Go in to a showcase for rock in New York, but management difficulties and fiscal problems kept it in the red.
The demise of the Café Au Go Go leaves New York with few rock clubs.  Ungano’s on the Upper West Side continues to prosper, as does The Bitter End in the Vllage.  The East Village’s tacky temple of tourism, the Electric Circus, also remains.  Cheetah caters to the R&B crowd.  Tarot, a new club on Union Square, is attempting to pick up where the Scene left off, and has two dance floors and a liquor license, plus, for better or for worse, the former musical director of  Hair hiring performers.

According to the Streets You Crossed blog, the building seems to have been torn down and replaced by apartments built sometime in the 1980s.
Posted by Corry342 at 9:07 PM