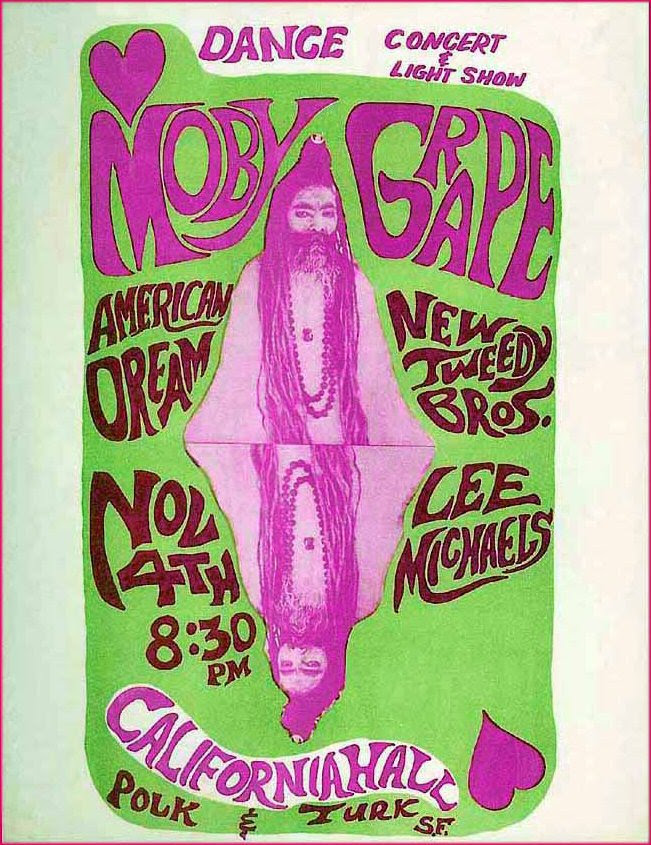 Moby Grape was one of the best of the San Francisco groups, but their never ending run of poor choices and bad luck has insured that they lead the woulda-shoulda-coulda category, with a long series of frustrations punctuating their career. Over the years, the nonetheless fascinating story of Moby Grape has been documented fairly comprehensively. However, there is no longer a good Moby Grape performance history on the Web, or at least not an accessible one, so I have constructed one for the years 1966-69. It was originally based on the one that was available on the web some years ago, but I have revised and added to it considerably.

My focus on this concert history is on Moby Grape's actual performance history, rather than an attempt to document their recordings or other aspects of the band's history. I have had to give some thumbnail information in order to make the history coherent, but I am aware that I am simplifying or leaving out many aspects of the band's history due to my narrow focus on concerts.

The Moby Grape Performance History will be in 6 parts (1966, early and late 1967, early and late 1968, and 1969). The history represents the best information available to me at this time. Anyone with additional information, corrections or insights into missing or incomplete performance dates please list them in the Comments or contact me.

Pre-Moby Grape
Moby Grape was put together by ex-Jefferson Airplane manager Matthew Katz.  Although its members were generally unknown at the time, they had all been scouted by Katz in various groups.  Katz was a difficult character, who remained (and may remain) in litigation with every band he ever signed for decades to follow, but he had an undeniable ear for talent.

Moby Grape were intended as a ‘supergroup,’ and they were truly impressive. Guitarist Skip Spence had been the Airplane’s drummer, bassist Bob Mosley had been in numerous groups in California, including the Joel Scott Hill Trio and The Vejtatbles, guitarist Peter Lewis (the son of Loretta Young) had been in a Southern California band called Peter And The Wolves, and lead guitarist Jerry Miller and drummer Don Stevenson had been in the Northwest band The Frantics (briefly including Mosley as well), which had involved into a group called Luminous Marsh Gas.

All five members wrote songs, were great singers and experienced on stage.  Pushed together by Katz, they hit it off and started writing material.  Katz arranged rehearsal space at a nightclub on a docked paddlewheel steamer in Sausalito called The Ark.  The band rehearsed all day for weeks on end, and played shows at The Ark for two weeks in October while a buzz built around town.

Their name was the punchline to a dumb 60s joke (“What’s purple and lives at the bottom of the sea?”).  Moby Grape always seemed like a parody of a San Francisco group:  a cute, dumb name, shrewd management and 5 handsome hippies who were music business pros who had grown their hair long. The thing about Moby Grape was, they really were absolutely sensational.  Their original material was great, their triple guitar attack and 5-part harmonies soared and they had charisma to go.  There was good reason for the buzz about Moby Grape.

Performance List 1966
October 11-16, 1966  The Ark, Sausalito Moby Grape/Lee Michaels
The Ark put on shows at night, and Moby Grape rehearsed there during the day. At some point the band playing at night as well. There may have been little difference between Moby Grape rehearsals and shows at this point.

October 18-23, 1966 The Ark, Sausalito Moby Grape/Lee Michaels
Moby Grape continued to rehearse at The Ark, and may have played even more shows.

Lee Michaels had been in a band called The Strangers with Bob Mosley, and had been in the surf band The Sentinals, and in the Family Tree (as Mike Olsen).  Now he was a singing organ player with his own band.

October 28, 1966 California Hall, San Francisco  Moby Grape/American Dream/West Coast Branch/Lee Michaels
This show was promoted by Katz, and according to Peter Lewis was an absolute disaster.  There were numerous folding chairs in California Hall, and all but a few dozen were empty.  One clue to the failure of this show is that one poster from this show has no date, which must have been a huge barrier to attending the show, notwithstanding no one in SF would have heard of Moby Grape (other versions of the poster have the date--h/t Ross for the above).

November 12, 1966 Goman's Gay 90s, San Francisco Buffalo Springfield/Moby Grape
The Gay 90s was a topless club at 345 Broadway in North Beach that at various times tried to book rock bands. A poster exists, but likely the show was canceled or rescheduled since both the Springfield and Moby Grape were playing at the Fillmore and the Avalon respectively.  Its not impossible the bands performed, but it doesn’t seem likely.

Sometime in November, possibly this weekend, Steve Stills and Neil Young end up in an after hours jam session at The Ark with Moby Grape, adding to Moby Grape’s status as an up and coming band.  Sometime later Neil Young will say laconically that his hit “Mr. Soul” was just a re-write of two Moby Grape songs.

November 25-26-27, 1966  Fillmore Auditorium, San Francisco Jefferson Airplane/James Cotton Blues Band/Moby Grape (27th afternoon)
Apparently Mathew Katz was unable to get Moby Grape gigs around town, as everyone was suspicious of Katz and didn’t trust him.  The Grape told Katz they had no use for him, and started arranging gigs themselves.  Peter Lewis arranged for them to play the Fillmore.

Moby Grape had debuted at the Fillmore, after playing the Avalon.  Graham generally appeared to let Helms book new bands at the Avalon, and if the word was good he booked them at the Fillmore. Everyone who saw the early Moby Grape was completely knocked out.  Unlike many ballroom bands, who often had little performing experience in electric bands (or in Grace Slick’s case, none whatsoever), the members of the Grape were all performing veterans.

December 2-3-4, 1966  Fillmore Auditorium, San Francisco Love/Moby Grape/Lee Michaels
At this time the Grape were doing much of the material that would turn up on their first two albums, as well as a lengthy (and ultimately unreleased) show-stopping Skip Spence song called “Dark Magic.” San Francisco had already been identified as a hot source of new bands by the record companies.  The shrewd Mathew Katz has timed the arrival of Moby Grape to maximize their impact.

Although the Grape felt they had ‘fired’ Katz, they had signed contracts with him, and as the record companies approached Moby Grape, Katz wormed his way back into the picture, setting the stage for contentious litigation between himself and the group that has continued into the present century.

Its possible that Moby Grape played early in San Rafael and later at the Avalon on Friday night, although that's not a guarantee. Still, the Grape had the same arrangement a few weeks later (January 13, 1967), so I'm inclined to believe they opened the show in San Rafael and then went over the Golden Gate Bridge.

December 30-31, 1966 Avalon Ballroom, San Francisco  Country Joe & The Fish/Moby Grape/Lee Micheals
At an Avalon Ballroom Reunion show in 1994, Barry Melton said from the stage “I remember playing a 63-minute version of [Moby Grape’s] ‘Murder In My Heart From The Judge’ on New Year’s Eve.”  He then added “it was probably 4 minutes long, but it seemed a lot longer.”