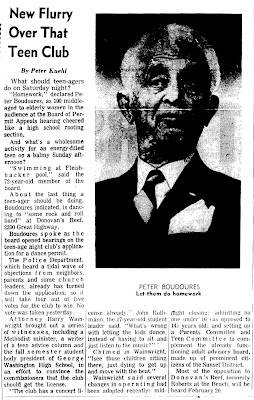 History is written by the winners, but sometimes the story of the losers can be more revealing. Most scholars of San Francisco rock music are at least generally aware of how the Fillmore battled with the City of San Francisco over various permits. San Francisco had a peculiar law left over from prohibition that required separate permits for presenting music and allowing dancing. In most cities, it was assumed that the right to present music implies the right for patrons to dance, but in San Francisco that was not the case. Apparently the original purpose was to discourage Speakeasies, but by the 1960s it had become a form of de facto bureaucratic control over San Francisco nightlife.

It is generally ignored that one of the reasons that the Fillmore and Avalon succeeded with the usually ill-advised strategy of presenting underground music without corporate (record company) backing was because there were so few places for young people to dance in San Francisco. If you were in your early 20s and liked rock music, even if you didn't like cutting edge weirdness, there was just about no place to dance with your girlfriend in San Francisco. The downtown hotels allowed dancing of course, but they played big band style music and were quite expensive. There were teen dances, too, but they didn't serve liquor and in any case no grown-up was going to take his girlfriend to what was effectively a High School dance. And if you wanted to go somewhere to meet someone who might be a future girlfriend, well, forget it.

In cities like New York, Chicago and Los Angeles, not to mention Bay Area suburbs, there were numerous "twist" or "Go-Go" clubs that did little more than serve drinks to encourage young adults to dance with each other to rock and roll. Almost none of these clubs existed in San Francisco, to my knowledge, incredible as it may seem, even though they had been common in big cities since the early 1960s and the days of The Peppermint Twist in New York City. There were plenty of jazz and folk clubs and the like, but no dancing was permitted. When Marty Balin helped open The Matrix in August 1965, with his band the Jefferson Airplane, the police would actually come in and bust people for dancing, since the club lacked a Dance Hall Permit. San Francisco likes to think of itself as a sophisticated city, but at the time it was like Footloose but with Beat Poets in place of Kevin Bacon (and Grace Slick as our own Lori Singer).

When the Family Dog debuted on October 16, 1965, followed by Bill Graham's first Fillmore promotion on December 10, 1965, and then the Trips Festival on January 21-22-23, 1966, whatever other dynamics were at work--and there were many--those who preferred The Beatles to Count Basie largely saw it as an opportunity to have fun. One of the reasons that the Fillmore (and later the Avalon) did so well with relatively unknown underground bands is that many patrons simply had no other choice. When Bill Graham took over the lease on the Fillmore on February 1, 1966, he was initially able to use the Dance Hall Permit of the previous leaseholder, Charles Sullivan. Since Sullivan was retiring, however (in itself another story), Graham rapidly ran afoul of the City, not least because the City's power structure was uncomfortable with the suspicious longhairs who patronized the Fillmore. At one point (I believe after an April 22, 1966 show with Quicksilver and The Grass Roots) Graham was actually arrested for allowing a minor to dance in a hall without a Dance Hall Permit.

The influential San Francisco Chronicle columnist Ralph J Gleason wrote about Graham's arrest, and generally shamed the City into allowing the Fillmore to have a Dance Hall Permit. To some extent, the fact that the Fillmore was in a largely African American neighborhood may have worked to its advantage, because while the City power structure may not have approved of Bill Graham's promotions, they did not have many concerns about the Fillmore neighborhood itself, since their eye was on redeveloping it anyway. Chet Helms at the Avalon had a similarly complex history with the City, and the Straight Theatre (on 1702 Haight) spent years struggling to receive a Dance Hall Permit. In the case of the Straight, their struggles insured they missed out on the most profitable year of San Francisco rock promotions.

It is informative to actually read the San Francisco Chronicle in 1967 and see how much pressure there was from younger people for the City to join the post-Prohibition era. One saga that received extensive play in the paper for months on end was an establishment called Donovan's Reef, located at 2200 Great Highway (at Rivera), on the very Western edge of both San Francisco and North America. The venue had originally been called The Sea Breeze in the late 19th century, and then Roberts-At-The-Beach, after its proprietor, Shorty Roberts. It had not survived Prohibition very well, but had continued on as a sort of destination amusement palace and carnival. By the early 1960s, now owned by Shorty Roberts son, it had become a Catering Company (a photo of the building in 1964 can be seen here).

In late 1966, another operator took over the former Roberts-At-The-Beach, with the idea of turning it into a sort of Teen Dance Hall. The proposal was that rock and roll dances would be presented, but that only patrons between 15 and 20 years old would be admitted. Imagine--you would need your little brother's ID to get in, not your older one's. Needless to say, there would be no liquor served. The Board Of Permit Appeals went out of its way to prevent any chance of this happening. At the time, the Ocean Beach neighborhood was more like a suburb, with plenty of families who had lived there for some time, not the surfer paradise it is today. Churches and elderly neighbors lined up 100 strong to testify against the club's Dance Hall Permit.

The Board Of Permit Appeals shot down every effort to allow a Dance Hall Permit for Donovan's Reef. The club already had a Concert Permit, but patrons would be arrested if they danced. The strange tone of the article above, from the February 7, 1967 edition of the Chronicle, only makes sense if you understand that it is a sort of Ocean Beach replay of Footloose, arguing over the right to dance in public without police interference. After months of struggle, Donovan's Reef had already opened, presenting rock bands but preventing patrons from dancing. Needless to say, it did not make for an ideal teenage experience.

The irony, of course, was that the people struggling to prevent the corruption of Ocean Beach neighborhood youth were simply pushing everyone to take their girlfriend downtown to the Fillmore or the Avalon, where considerably stranger things were already occurring. By 1969, with much of this nonsense done with, Chet Helms would move his Family Dog operation to Ocean Beach, 14 blocks North of Roberts (at 660 Great Highway). In 1967, however, the Ocean Beach neighborhood and the aged members of the Board Of Permit Appeals won their little victory, forcing Donovan's Reef to prevent dancing, and insuring that every neighborhood kid would head downtown.

Donovan's Reef was only open in February and March 1967. I know the Turtles  played there on March 3 and 4 but I don't know any other gigs there. There is a Roberts-At-The-Beach Motel at Sloat and The Great Highway, near the Zoo, about six blocks from the original site, the last trace of the Roberts saga. At some point, the original building was demolished, and the site is just sand dunes now.

Update: Ross weighs in with a genuine artifact 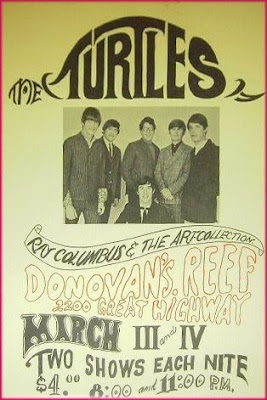