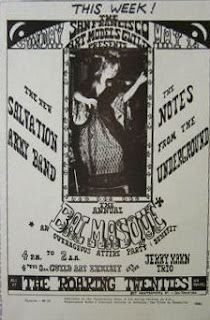 Following on from an earlier teaser about the New Salvation Army Banned moving on from it’s residency at Varni’s Roaring Twenties, I thought we would take a look at the cause of their contract being cancelled.

WHAT’S IN A NAME

Would you attempt to trade stocks with Big Brother and the Holding Company? Would you try to book a flight to Chicago with the Jefferson Airplane? And what kind of salvation would you expect from the New Salvation Army Banned?

The New Salvation Army Banned is a Haight-Ashbury rock group which has recently run afoul of the real Salvation Army. They had played at the Avalon and Fillmore Ballrooms and at Varni's Roaring Twenties in North Beach, which is a topless club. But then the pressure was put on.

In the true spirit of Christian charity, the Salvation Army hired a lawyer to threaten the rock group. Bryant Cohn, the manager of the Banned and of the Roaring Twenties, received a phone call from a San Francisco lawyer in May. He made it plain that the Salvation Army was "upset" and "irate" and warned the band to "cease and desist" from using its name. "The Salvation Army has had many phone calls asking, 'What is one of your bands doing in a topless place?’" the lawyer said,

"We thought the name was very appropriate," Cohn replied. "The group sings about Vietnam, about turning on, about love. The Salvation Army of yesteryear would get on a street corner and sing the old gospel, which is all well and good. But our group sings the message of today the new gospel. It's the 'new salvation', and its 'banned'. Get it"?

"Its use in connection with the uniforms which are replicas of those worn by members of the Salvation Army tends to damage and to hold up to ridicule and contempt the members of the Salvation Army, particularly in consideration of the surroundings of the business conducted on your premises," they concluded. Actually, the rock group's "uniforms" consist of World War I type Army jackets and high-crowned, Amish style hats.

Club owner Varni decided that he would no longer employ the group at his club while they kept that name, since "it certainly is not our desire to embarrass or ridicule so fine and worthy an organization as The Salvation Army”.

However, he went on to advise the lawyers that “we have no control … over a group of musicians as to what they want to call themselves when they are playing at clubs other than the Roaring Twenties”. Also, he wrote the lawyers, "we have strongly suggested that (Mr. Cohn) counsel the group to use good sense and change their name."

The group did not change its name. Although the Banned no longer performed at the Roaring Twenties, it continued to be heard around town. It had gotten some good reviews and its reputation was growing.

Several weeks ago, Cohn received a letter from the Better Business Bureau of San Francisco. "We find that your use of the Salvation Army name is causing confusion and misunderstanding as it relates to your musical group," it read.

"As an aid to you, we call this matter to your attention feeling an awareness of the potential dangers inherent in continuing this, may be detrimental to you and your associates." After this ungrammatical but unmistakable threat, the letter concluded, "please advise us of your authorization to use the Salvation Army name and whether your group in reality represents what is implied by the title "New Salvation Army Band" (sic).

The letter was signed by Charles R. Thurber, Executive Vice President of the Better Business Bureau of San Francisco.

From then on, strange things began to happen. There were hassles with the Union. And the name of the Banned disappeared from the entertainment columns of the San Francisco Chronicle. For example, Ralph Gleason's column announced a big weekend list at the Avalon Ballroom three weeks ago. All the rock groups which were to play were mentioned except the New Salvation Army Banned. The same thing happened in his announcement of last week's Magic Mountain Festival, at which the group was slated to appear. 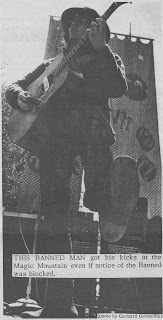 POWER
To the Barb, what had started as an amusing comedy of errors began to take on more serious implications. What was the power of this so-called charitable group that to risk its displeasure meant lawyers' threats, pressure from the Better Business Bureau and a virtual publicity blackout by a major newspaper? We contacted the Better Business Bureau and Interviewed Mr. Thurber. He said he thought the group's name caused "unnecessary confusion" and, when pressed, thought that other rock groups with similarly "confusing" names could have action brought against them by the offended businesses.
"We never really thought of the Salvation Army as a business,” the Barb said. “Oh, it’s a business, all right,” he replied. “A big business.” A little checking brought to light that within San Francisco, the Salvation Army owns a great deal of property and real estate, including its seven community centers.
TREMENDOUS
The magnitude of the operation is enormous, and no one seems to really know just how big it is. “It's tremendous," said one source, "like the Roman Catholic Church. It's very rich, and its arm is long." Like the Church, it pays no taxes.

The Barb contacted an anthropologist who is working on an undercover expose of the organization. He posed as a wino and joined the recipients of the Salvation Army's "bounty."

Although he uncovered many evidences of abuses he is, understandably, withholding these until the publication of his report. "But I can give you some idea of the business aspect," he said. "I worked on a truck which would pick up stuff which was contributed to the Salvation Army, We usually picked up two truckloads a day. And there were 23 radio controlled trucks. I counted them."

The Barb’s advanced mathematicians have calculated that if the contents of each truckload would yield $1,380 a day and $6,900 for a five-day week. This bare-minimum estimate of junk pick-ups alone comes out to $358,000 a year. Of course, the actual figure must be much higher - probably well over half a million. And, of course, this does not include the income from bequests, Federal grants, investments, property, and the contributions which daily accumulate in proffered tambourines.

A former resident of Skid Row who is now a dedicated worker in a social service agency, told us, "The Salvation Army is a mendacious parasite. Like other Establishment sops to the poor and down-and-out. It is the organization which benefits more than the people it is supposed to be helping."

"We can't appear with them," said a spokesman. "I think we’re going to sue them." Other groups to appear at the Fair next week include the Freedom Highway (attn: Dept. of Roads and Highways), Mount Rushmore (will the Parks Commission object?), and the Freudian Slips (will Sigmund's heirs sue?).