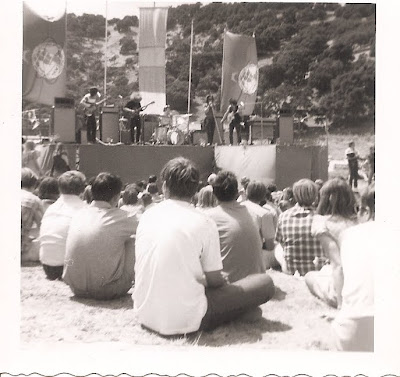 Update: Once my friend actually saw her photos blown up to a larger size on the blog, she realized the concert was not in Canyon at all, but at an undeveloped area next to the Buckeye Ranch in suburban Lafayette, not far from Canyon but a different place entirely. Most of my suppositions about the concert that I have promulgated for some time turn out to be incorrect, and I now believe that this concert was July 22, 1967, a show which I have written about elsewhere. The photos are still fantastic, and long lost, although my conclusions are quite different.
Many years ago, a friend of mine recalled seeing Country Joe and The Fish and The Grateful Dead in1967 at a benefit concert on Labor Day weekend in tiny Canyon, California, just over the hill from Berkeley. She proved this astonishing tidbit by unearthing photos she had taken with a Brownie camera. While she ran out of film before the Grateful Dead appeared on stage, the photos provided snapshots--literally--of San Francisco rock when it was still off-the-cuff. She vaguely recalled a few other details, but at the time I talked to her about it the concerts were about twenty years past.


Canyon, California is an unincorporated community just over the hill from Berkeley, but part of the next County (Contra Costa). Even today it is only accessible by some winding, rarely traveled roads, and most residents of Alameda County (which includes Berkeley and Oakland) and Contra Costa County (which includes Walnut Creek, Lafayette and Moraga) can go their entire lives without ever driving through Canyon, or even realizing it exists. Isolated and iconoclastic Canyon became a counterculture outpost in the 1960s. A poster has survived of the first known Canyon rock concert, a benefit held on July 16, 1967, featuring Country Joe and The Fish, The Youngbloods and others.
When I first raised the possibility of a Grateful Dead/Country Joe and The Fish show on Labor Day in 1967, others looked into it, and one intrepid researcher found some evidence of it in a book called Berkeley At War. Country Joe McDonald himself seemed to confirm it. Deadlists summarizes the entry as follows (under the date 9/??/67):

Bill Gallagher: in the book "Berkeley At War" by WJ Rorabaugh (1989), p. 145 it says "In 1967 Canyon's hippies held a benefit concert to raise money to rebuild their general store. Country Joe McDonald, the Grateful Dead and others came to play. The narrow, winding road into Canyon was clogged with flower-painted VW vans." Canyon is a small community over the hill from Berkeley towards Moraga and Walnut Creek. Bill Gallagher contacted Country Joe and he said: "The benefit was held in Canyon, I believe, in the school yard of the little private school. I have a couple of posters of the event. cheers, cjm"

Based on the Grateful Dead's touring schedule, I had assumed that the concert was Monday, September 4. The Dead were playing Santa Cruz on Saturday, and they played Rio Nido Dance Hall on Sunday night (September 3) and possibly Monday night as well (I couldn't confirm two nights at Rio Nido). In any case, it was reasonable to assume they played in the afternoon of either the 3rd or the 4th, and I'm assuming they played on Labor Day itself (Sep 4). Thus I was responsible over a decade ago for both the listing in Deadbase and the listing on Ross's definitive Country Joe Performance History. There were some conflicts with the CJF timeline, but they were in flux at that time, so anything was possible.


Recently, my friend got a scanner, and after some begging from me, sent me the photos and allowed me to post them on the blog. I cheerfully wrote a post explaining how the Grateful Dead and Country Joe and The Fish played tiny Canyon, CA on Labor Day. The original photos were quite tiny, however, and once my friend saw them in a larger size, she realized it wasn't Canyon at all, but rather a place in Lafayette called Buckeye Ranch (sometimes known as Keener Ranch). A little bit of research and speculation suggests the following conclusions, all of which I will free to change if new information comes to light:
The Buckeye Ranch (owned by the Keener family) now appears to be part of Briones Regional Park, as there is a "Buckeye Ranch Trail" at the Southeastern edge of park (The Keener family moved the Buckeye Ranch to Dixon, CA). Springhill Road has been largely developed, but it dead ends in Briones Park, so its unclear whether the site of this concert is a housing development or parkland.

Assuming my supposition about the July 22, 1967 concert is correct, this leads to three prosopographical corrections, all my own fault:
In my friend's defense, the Dead were just another band in those days, and she had seen them various times (the Avalon, Human Be-In, etc) and she had simply confused them with Steve Miller Band or someone else. I was the one who was tremendously interested in the photographs--such are the perils of researcher enthusiasm.

With all that being said, the Lafayette event of July 22, 1967 was remarkable in its own right, and these photos are a fantastic window into a forgotten event. 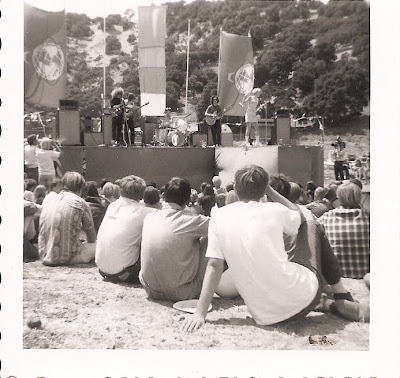 Notice the biggest difference between the above photo and the one at the top of the post: the above one has a tall woman in a white minidress and go-go boots, and a man filming her. The top photo has no go-go dancer, and no film. This does lead to the tantalizing possibility, however, that there is film of this event. I know little about 60s underground film,  but some relatively well known film artistes lived and worked in Canyon (which wasn't far away) and were associated with some of the bands (Robert Nelson, for example, made a 7-minute film of the Grateful Dead around this time), so someone might be able to identify the cameraman (I think he's visible in the same place in the top photo, without the camera).
The crowd at the concert seems distinctly suburban, not surprising for sleepy Lafayette. Lafayette is a prosperous suburb now, but it was a smaller and less well-off (though hardly poor) community then. The Springhill Road site is very near Acalanes High School in Lafayette, so I would guess that Lafayette students make up the bulk of the sparse crowd. Other High Schools, like Campolindo in Moraga, were not far away, and St. Mary's College (and High School), also in Moraga, was also not far away, although there would have been few St. Mary's students around in the Summer. The town of Lafayette was not ready for the psychedelic rock scene of San Francisco and Berkeley (see the article below), but at least some of the students were already waiting for it to arrive. 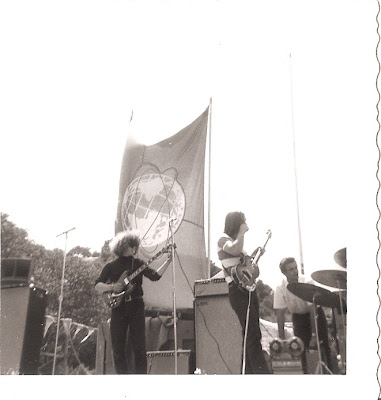 This otherwise unspectacular photo of Barry Melton (l.) and Bruce Barthol tuning up offers one incredibly intriguing detail: there's a reel to reel tape recorder on stage. So not only might there be film footage of the performance, there could be a relatively listenable tape recording as well.
I don't see any other band's equipment. This may be because Country Joe and The Fish were headlining, and everyone else's equipment was gone, or it may be because there was a staging area out of site (such as behind the stage). Nonetheless, if the tape deck was running, there may be some cool tapes of Steve Miller and Salvation (aka Salvation Army Banned). Only six of the scheduled groups played, and the only ones we know for certain are CJF, Miller and Salvation, although I have reason to believe a Walnut Creek group called The Virtues played as well (they later became Country Weather). 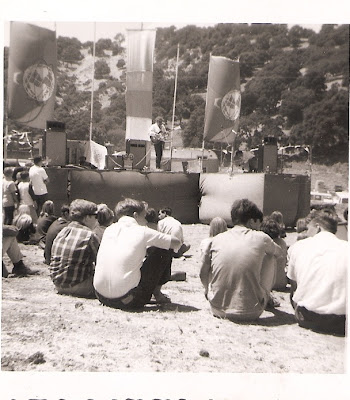 We conclude with a mystery. The last shot seems to be a solo performer with an electric guitar. My friends have simply forgotten who this might have been. Could it be Steve Miller, performing solo? He does seem to be performing in front of the Fish's equipment. I do note that the tape recorder is present, too.  Miller, at any rate, was well known around this period for using tape loops.

Regardless of my own fumbling about the date, these are amazing photos of a rock concert in the Bay Area suburbs in the Summer of Love itself, so near and yet so far from Berkeley and San Francisco.


Appendix
My write-up on the court case about the concert is here.
The article below is from the Oakland Tribune of July 26, 1967 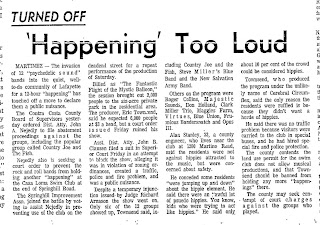