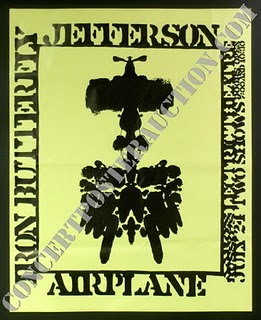 Chicago is one of the world's great cities, by any accounting, and it has a musical heritage to match. While today it is mostly renowned for introducing electric blues to the outside world, Chicago has made memorable contributions to jazz, soul, folk and rock music as well. Chicago had always been a critically important outpost for any touring act, regardless of the style of music. While the weather in Chicago can be daunting, there has always been excellent public transportation and fearless cab drivers, so a patron can always get home at 4am when the bars close.

In the 1960s, Chicago was an essential stop for any rock band looking to make it big. Chicago fans love a good time, but they have high standards too, as the blues band playing down the street in Chicago was better than most blues bands headlining in London or San Francisco. The pace of the city and the barriers of the weather make Chicago fans enthusiastic about good performers and ferociously dismissive of pretenders. Any discussion about music with a Chicago rock fan will immediately lead to stories of over the top concerts that seem to happen every month (a friend of mine once described seeing fans tear apart the Chicago Opera House during a 1970 Iggy and The Stooges concert by saying "If I was born the night I saw Iggy, I'd be old enough to drink now"). Nevertheless, the history of sixties rock in Chicago remains unnecessarily scattered, so I will begin to rectify that now.

Despite, or perhaps because, of its financial importance, Chicago did not have a single venue that was Nationally recognized like The Fillmores. The city of Chicago had numerous old buildings that could easily be converted to rock concert duty, even if all of the buildings had a variety of flaws. As a result, the late 1960s and early 1970s saw numerous venues rise and fall, such as The Cheetah, which became The Aragon Ballroom (at 1106 N. Lawrence) and the Chicago Coliseum, which became The Syndrome (on Wabash Avenue). Other venues were also regularly used for rock shows, like The Auditorium Theater and  the International Amphitheatre. However, Chicago's principal stop on the 60s rock circuit was The Kinetic Playground, at 4812 N. Clark Street.

4812 N. Clark Street was originally known as The Rainbo Gardens, and it was a sort of dance hall and entertainment center. It was used for various functions over the years, but in 1968 Brooklyn-born promoter Aaron Russo (then 24 years old) took over the ballroom. The building itself was somewhat larger, and included a skating rink, but Russo opened a rock nightclub in the former Rainbo Gardens Ballroom on April 3, 1968, and named it the Electric Theater. Russo had worked in his family's garment business and put on rock shows as a High School student, so despite his young age he was well prepared for the cutthroat rock business.

The Electric Theater opened in April of 1968, and by June, 4812 N. Clark Street in Chicago was an essential stop on the "Fillmore Circuit." Bands that played such venues as the Fillmores, the Boston Tea Party and The Electric Factory always played on N. Clark Street as well. Talent agent Frank Barsalona, all but single-handedly responsible for breaking English bands in America, made The Electric Theater a critical stop for his bands, and many of the most legendary concerts in Chicago were early appearances by groups like Led Zeppelin, Jethro Tull and Ten Years After.

What follows is my working list of known performances at 4812 N. Clark Street, as both the Electric Theater and later the Kinetic Playground. It appears that it was only open on weekends, but there may have been additional shows that I am not aware of. This list has been constructed from surviving handbills and from the chronologies of the various bands. The existing handbills for the venue are primarily just lists of upcoming shows, with little in the way of collectible or interesting artwork, so Chicago handbills did not stay on people's dormitory walls the way posters did from San Francisco or Detroit, making research somewhat harder.

I believe the venue was open every weekend, even in the Winter, from April 3, 1968 until November 7, 1969, so there are many more shows to be discovered. Anyone who has additions, corrections and memories (real or imagined) regarding shows is encouraged to Comment or Email me. Thanks again to everyone who sent me amazing clippings, recollections and corrections in order to improve my previous post.

May 21, 1968--according to the Chicago Tribune, the police raided the Electric Theater and shut it down. I do not know for sure how long it was closed, but at least some of the following shows must have been canceled. I suspect they were up and running by the next weekend (Friday May 24), although the Friday entertainment music listings in the Tribune (below) had probably been prepared in advance.

June 10, 1968 Electric Theater Loading Zone
This was a Monday night show, probably a relatively rare occurrence. The Loading Zone were a San Francisco band getting a big push from RCA behind their debut album. The record company probably rented the hall for the night and distributed some (or all) tickets through radio stations.

June 26-27, 1968 Electric Theater Hello People
June 28-30, 1968 Electric Theater Blue Cheer/Hello People
The Hello People were a peculiar mixture of mime, vocal harmonies and rock. I believe they headlined themselves on Wednesday and Thursday (26 and 27). Blue Cheer, at the time, touted itself as the loudest band in the world, with a tower of Marshall Stax turned up to the max. Who do you think Chicago liked better?

July 5-7, 1968 Electric Theater Rotary Connection/The McCoys/Growin Concern
Rotary Connection seems to have been the only Chicago-based headliner in 1968, but of course since we do not have a list yet of every show, I don't know if that was entirely true. The McCoys, from Indiana, were trying to remake themselves into a psychedelic blues band, which was a long way from "Hang On Sloopy."

July 12-14, 1968 Electric Theater Spirit/Peanut Butter Conspiracy/T.I.M.E
Although the dates are slightly approximated (the Chicago Tribune said "this weekend"), all the groups were from Los Angeles. Spirit were rising stars, and Peanut Butter Conspiracy somewhat fading ones. T.I.M.E was connected to the Steppenwolf/Toronto crowd, now relocated to LA.

July 17-21, 1968 The Electric Theater Earth Opera/Sunshine Company (19&20)
Thanks to a Commenter, we know from a flyer that Peter Rowan and David Grisman's baroque-psychedelic-folk rock band, Earth Opera, headlined for a four day stretch, joined by the airy pop of the Sunshine Company (from LA) for the last two days.

August 9, 1968--the club officially changed its name to The Kinetic Playground (per the Trib)

(a clip from the Chicago Tribune entertainment listings for Tuesday, August 16, 1968--h/t Joe)

August 16-17, 1968 Kinetic Playground Mothers Of Invention/Them
This would have been a Tuesday and Wednesday night, but Frank Zappa was much beloved in Chicago and this would have still been a very big deal. Van Morrison had left Them two years earlier, but the 1968 configuration was still apparently a pretty good live band. 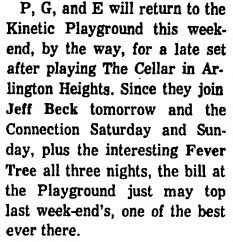 October 12-13, 1968 Kinetic Playground Rotary Connection/Pacific Gas & Electric/Fever Tree
P,G & E were a Los Angeles blues-rock band. Fever Tree was often thought to be a Bay Area band, because of their hit "San Francisco Girls" but in fact they were from Houston, TX.

(a clip from the Chicago Tribune entertainment listings on Friday, October 18--h/t Joe)

December 6-7, 1968 Kinetic Playground Buddy Miles Express/Deep Purple
Buddy Miles was the headliner, as Deep Purple was not yet well known. This was the original version of Deep Purple, best known for the song "Hush," and featuring Rod Evans on vocals.

For 1969 shows, see the original post here. I will continue to update this post as more information comes in, and re-post when there is enough information. Thanks again to everyone who helped.
Posted by Corry342 at 9:14 PM