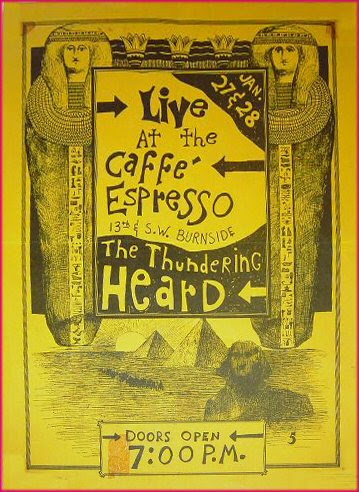 This post is a summary of known rock performances at the Caffe Espresso in Portland, Oregon from late 1966 until mid-1967. The Caffe Espresso was located at 409 SW 13th Avenue (at West Burnside Street), and played a critical role in the development of psychedelic rock in Portland, and thus indirectly on the West Coast as well. It also makes an excellent case study of the mid-60s cultural and musical migration from Folk music to Rock, an event that is paralleled by many similar venues at the same time, such as Berkeley's Jabberwock.

This is part of a series of posts on the Portland rock scene in the late 1960s. For more, see threads here and here.

Portland, Oregon
Portland, Oregon is located on the Willamette River, shortly before it merges with the mighty Columbia River. Although Portland is over 100 miles from the Pacific Ocean, seagoing ships were able to sail upriver to Portland, and in the 19th century Portland was the point of embarkation for timber, agricultural and mining products from the Pacific Northwest. While Portland remained an important commercial city throughout the 20th century, it continued to function in the shadow of larger cities along the West Coast.

In the 1960s, Portland may not have been as liberal or freewheeling as San Francisco, but like most port cities it was comfortable with a wide variety of people and a broader view of the world than other places, so the arts received a friendly welcome. Portland’s location between Seattle and San Francisco made it a regular stop on National tours of all types, and Portland had always been a prominent stop on the folk music circuit. When the Beatles hit, and as music migrated from folk to rock in the middle 1960s, various beatnik and folk music oriented coffee shops in Portland started staging rock shows, usually on weekends.

The definitive work on the Portland coffee-house music scene in the 1960s is Valerie Brown’s exceptional article in The Oregon Historical Quarterly, “Music On The Cusp: Folk To Acid Rock in Portland Coffeehouses 1967-70”  [Brown, Valerie, Music on the Cusp: From Folk to Acid Rock in Portland Coffeehouses, 1967-1970. Oregon Historical Quarterly 108.2 (2007): 63 pars. 10 May 2009]. Brown’s detailed research and numerous interviews make for an exceptional portrait of how a town reacted to the musical and cultural changes of the 1960s.

Caffe Espresso, Portland, OR 409 SW13th Ave at W. Burnside St
In late 1966, The Caffe Espresso, at  SW 13th and West Burnside (around the corner from the Crystal Ballroom), started promoting rock bands on weekends, complete with light shows and colorful posters.During The Caffe Espresso’s brief foray into rock promotion, they booked mostly regional acts (the definitive resource for almost every rock band in the Pacific Northwest is the great Pacific Northwest Bands site on the Sonics website).

Thanks to Valerie’s Brown exceptional research, the confusing timeline of Portland coffee house music venues can be clarified. There had been an earlier Portland coffee shop named Caffé Espresso, at SW 6th and Harrison, and it was a famous Portland beatnik hangout, but it closed in 1965, when its owner bought out of his lease for an urban renewal. Meanwhile, a popular folk music club called The Folksinger had moved from its original site on SW 10th (across from the Country Library) to 409 SW 13th at W. Burnside. The Folksinger had a capacity of about 100, and in 1966 manager Whitey Davis began to experiment with blues, jazz and rock bookings as well as folk. Davis had worked with Chet Helms and The Family Dog in San Francisco, so he was connected to the underground music scene. At some point in late 1966, the Folksinger changed its name to Caffé Espresso (in part probably to avoid the now somewhat stale “folk” association).

By early 1967, Davis was promoting rock bands, complete with light shows, on weekends at the Caffé Espresso. Weekdays still featured local folk performers, in a variety of styles. A unique factor of the Portland live music market at the time was that clubs that served alcohol were effectively barred from hiring bands (until 1973), so coffee houses did not face competition from conventional rock clubs. The small capacity of Caffé Espresso was frustrating, however, and in January 1967, Whitey Davis found a partner and started to book shows around the corner at the larger Crystal Ballroom. The booking for the Caffe Espresso was taken over by Larry Howard, but given the close proximity to the Crystal, it is likely that there were at least social connections to Whitey Davis.

The Café Espresso booked mostly regional bands throughout the first half of 1967. However, the changing economics of the rock business made it hard to compete with larger venues, and other more hippie-oriented coffee shops like The Charix took away patrons as well. The Café Espresso stopped booking rock shows in mid-1967, although it may have stayed open until 1968.

Caffe Espresso Rock Performance List
Late 1966
While the venue was still called The Folksinger, manager Coleman “Whitey” Davis started booking local bands like The New Tweedy Brothers and The Great Pumpkin, as well as acts like Lightning Hopkins. In one particularly famous incident, a band from Las Vegas called The Weeds, on their way from San Francisco to Vancouver, ran out of gas in Portland during the last week of October. Lead singer Fred Cole fell in love with a girl named Toody Conner, who worked at The Folksinger, and The Weeds stayed in Portland. This allows us to date the name change as no earlier than November 1966 , and more likely December (Fred and Toody are still married, by the way). 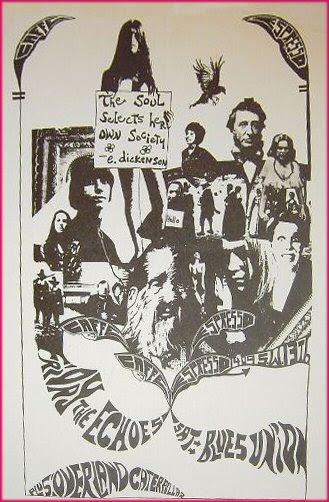 After the venue changes its name to Caffé Espresso, some undated posters (see above)—possibly from 1966--exist with bands like The Echoes, Blues Union, Overland Caterpillar and The PH Phactor Jug Band. Whitey Davis took over the lease on the Crystal Ballroom on January 1, 1967 and his first show at the Crystal was January 20. In January, Larry Howard took over the booking at Caffe Espresso, although given that they were only a block from each other, its likely that Whitey Davis still had an informal role in booking acts.

1967
January 27-28, 1967  The Thundering Heard
The first dated poster that I am aware of (top) is for Friday and Saturday, January 27 and 28, 1967. It appears that folk acts played weeknights, but rock acts started to be featured on weekends. 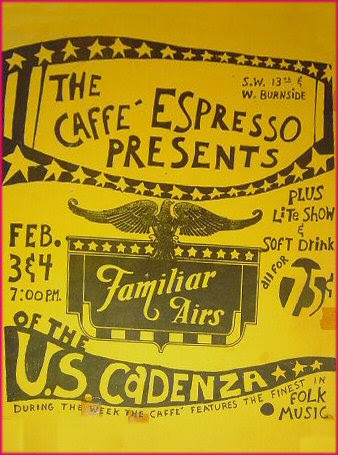 February 3-4, 1967 U.S. Cadenza
Consider the economics of a club like Caffe Espresso. The cover charge is 75 cents, and the capacity was apparently about 100. Granted, the club assumes a certain amount of turnover throughout the night, and expects to sell some coffee and food throughout the night. Given that the club could not sell beer, wine or liquor however--per Portland law, saloons could not have live bands--the take for refreshments would have to be limited. It seems reasonable that a busy Friday night might have 150 patrons, and assuming a few coffees and the like for each person, the take might be $200 or $300. Just making some broad assumptions about expenses and overhead, assume that the performers got half of that. Now, $100 is a great night for a solo artist with a guitar, at least in 1967. Its very different for a four or five piece band with a van, amplifiers and electronic equipment. On a less successful night, even $25 might be worth it for a solo folk musician, but $25 would hardly be worth it for a band. Although there was clearly a lot of interest in rock music from Portland College and High School students, the economic parameters at a venue like Caffe Espresso were not ultimately in favor of booking rock acts. 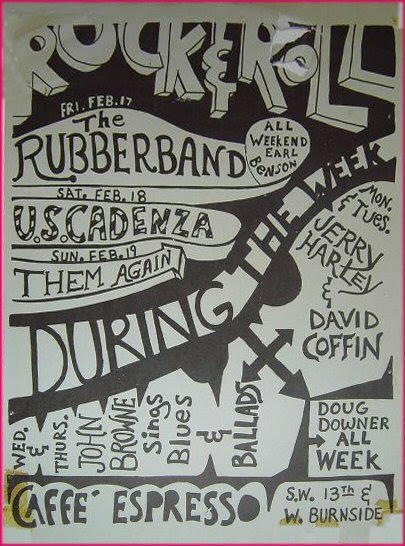 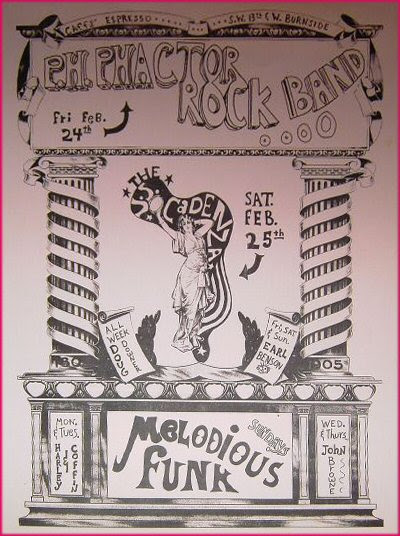 February 24, 1967   P.H. Phactor Rock Band
February 25, 1967  U.S. Cadenza
February 26, 1967   Melodious Funk
The handbill clearly says “Rock Band” instead of “Jug Band.” Whether PH Phactor was playing as a rock band, with drums, or whether it was just to accommodate the flyer, Café Espresso clearly needed to establish that they were not a folk club on weekends.

Note the solo (and apparently folk) acts advertised throughout the week 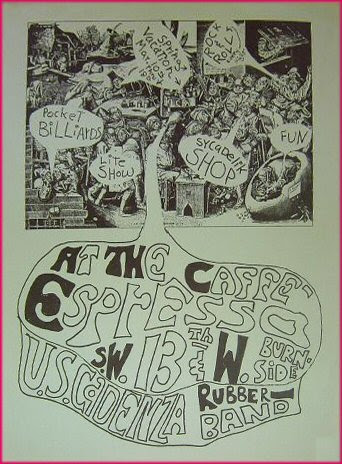 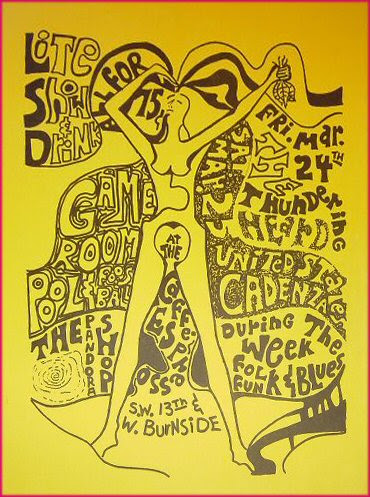 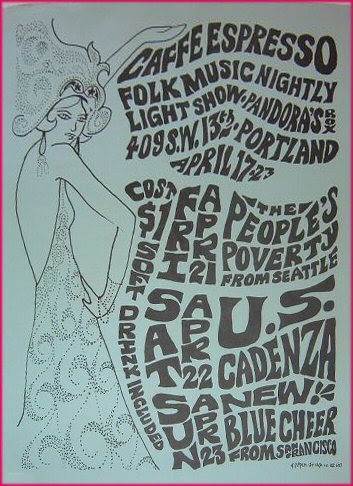 April 21, 1967 Poverty’s People
April 22, 1967 U.S. Cadenza
April 23, 1967 Blue Cheer
The poster says "Blue Cheer-from San Francisco." Blue Cheer turns out to have been the most famous band known to have played Caffe Espresso, although at the time they were an obscure, unrecorded band very low on the San Francisco underground circuit. Blue Cheer was playing Saturday night (April 22) at Portland State College, so an additional night at Caffe Espresso would help to make the 680 mile drive worth the group's time. 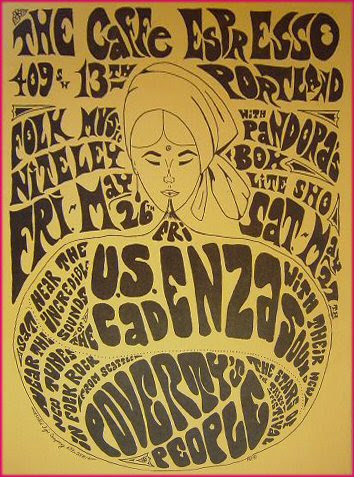 May 26, 1967   US Cadenza
May 27, 1967   Poverty’s People
The handbill for the May 26-27 weekend says “Hear the incredible rock sounds of the U.S. Cadenza with their new sound, “ and "Hear the new tunes in Folk-Rock from Seattle’s Poverty’s People, the stars of the Trips Festival.” Poverty’s People, a band from Centralia, WA, had played Portland’s Trips Festival two weeks earlier (May 14, 1967) as The Poverty Five 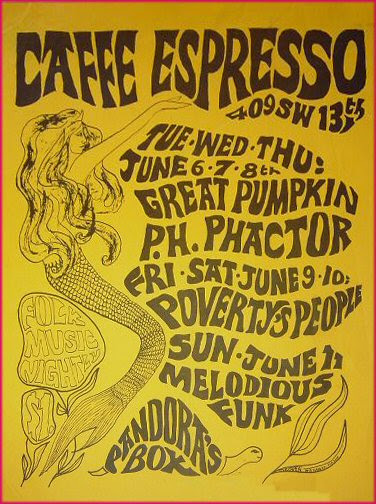 June 11, 1967  Melodious Funk
This is the latest handbill for a Caffe Espresso rock show that I have seen. The Caffe Espresso may have remained open as late as early 1968, and there may even have been rock shows, but at this point the trail grows cold. The Portland hippies had shifted to The Charix, the new shop in town, and the Crystal Ballroom, Portland's leading venue, was just around the corner, so the Espresso was squeezed on all sides.

The Caffe Espresso played a critical role in the founding of the psychedelic rock scene in Portland. Although various promoters used local ballrooms for events, the Caffe Espresso seems to have been the first establishment to book shows every week. Yet the very economics that made coffee houses viable folk venues worked against it as a rock venue, a fate shared by contemporary venues around the country (such as Berkeley's Jabberwock and New York's Cafe Au Go Go, to name a few). As the rock market exploded nationwide, smaller venues like Caffe Espresso fell by the wayside.

update: it was pointed out to me (h/t Doug) that in the same building as the Caffe Espresso, but at 411 West Burnside, was the Northwestern Inc. recording studio. In this modest studio on April6 , 1963, engineer/proprietor Bob Lindhal recorded The Kingsmen's seminal hit "Louie Louie." The Kingsmen's version was not initially as succesful as the one recorded by Paul Revere and The Raiders, but remarkably enough the Raiders version was recorded at Northwestern just a week later, on April 13, 1963. While the early 1960s is a bit outside of my timeline, the World Historical import of "Louie Louie" overrides that concern. I do not know if the studio was still active in 1966-68 when rock bands played at the Caffe Espresso or around the corner at the Crystal Ballroom.
Posted by Corry342 at 4:55 PM