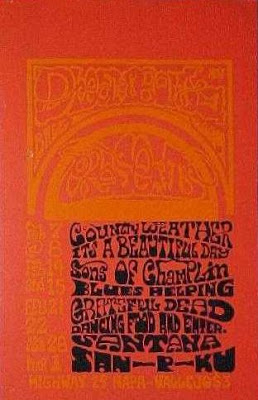 The Dream Bowl in Vallejo would be an entirely forgotten venue except for the fact that a few Grateful Dead tapes from February 21 and 22, 1969 remain in the vaults. Deadhead persistence seems to have unearthed the poster above.  Despite its brief tenure, however, The Dream Bowl has a quite interesting history, and the brief run of shows from February to about April 1969 represent an excellent idea just a little bit ahead of its time.

Although the run of "psychedelic" rock shows at the Dream Bowl is quite brief, it had been a music venue since the 1930s--possibly earlier--and had hosted big bands, Texas Swing music, rhythm and blues, country stars and teen rock and roll dances prior to its hippie incarnation. The Dream Bowl was apparently about 10 miles North of Vallejo on Highway 29 (currently the Napa-Vallejo Highway). Apparently it was near the intersection of Highway 29 and Kelly Road (just past Napa Junction). That would actually put it in the town of American Canyon, but as that town was only incorporated in 1992, the Dream Bowl would have been considered part of Vallejo back in the 60s. Supposedly the building still exists, as a furniture warehouse.

Vallejo, Solano County and Napa County
Vallejo, California is the largest city in Solano County, which is just East of Napa County. Vallejo provided access to San Francisco Bay for farmers from Solano, Napa and Sonoma. The area had become prosperous at the turn of the 20th Century when the San Francisco, Napa and Calistoga Railroad provided electric rail and a ferry connection to San Francisco. The initial Napa to Vallejo leg, along with the Ferry, opened in 1905, extending to Calistoga in 1908 (the same general right-of-way is followed by today's Napa Wine Train).

Solano, Napa and Sonoma Counties shipped produce throughout the West (via Southern Pacific) and was a San Francisco resort area as well. Sometime in the late 1920s or early 30s the Dream Bowl was constructed by contractor Walter Polley as a Dance Hall for Big Band music. Local and touring acts played the hall. Although the railroad waned in the 1930s, the Golden Gate and Bay Bridges allowed increased transit across the area.

Area Music History
In World War 2 Vallejo housed a substantial naval base at Mare Island. As a result of the Mare Island base, Vallejo was also a center for shipbuilding in World War 2. Many workers from the South, both black and white, moved to the Bay Area to work in the Defense industry, which mostly revolved around building Merchant Ships. Other shipbuilding centers around the bay included Hunters Point in San Francisco, Oakland, Richmond and Marin City (not coincidentally, all those areas have had relatively large African-American populations since then).

Since the wartime Defense industry ran around the clock, there were large numbers of workers with money burning a hole in their pockets, waiting to be entertained. Musicians from the South played substantial shows up and down the West Coast, from San Diego and Los Angeles to the Bay Area, and in Portland and Seattle as well. The audience for these musicians had moved to the West Coast, so the performers did to. San Pablo Avenue in the East Bay had so many venues it was known as "Music Row." All types of music were represented, and the Dream Bowl seems to have done a prosperous business, as did most music venues around the Bay (not to mention bars) during the war. The Duke Ellington Orchestra, for example, played The Dream Bowl on February 7, 1945.


In 1944, I drove the family's '33 Chevy with its A-sticker (ask your grandparents) in the window up Highway 29 north of Vallejo to an oversized Quonset hut roadhouse-dancehall-brawl arena called the Dream Bowl to hear McShann's band on its first California gig.

The Dream Bowl would feature, for example, Bob Wills and his Texas Playboys one night, McShann and his Kansas City jazz-blues band the next. Whites (only) went to Wills; blacks flocked to their music, such as McShann's. But any jazz and blues out of the black community drew some whites, like me.

Although the Vallejo shipyards reduced their activity after World War 2, the Naval Base at Mare Island was still active. The Bay Area had a considerably larger agricultural footprint than it does today, and country music was very popular in places like San Jose, Fremont and Vallejo. There are many reports of seeing country stars like Bill Monroe at the Dream Bowl in the 1950s, and Berkeley's Herb Pedersen (later in The Dillards and Desert Rose Band) recalls playing bluegrass shows there in the 1960s (with Vern And Ray).

Very casual googling shows that Vallejo area residents fondly remember going to regular Saturday night dances at the Dream Bowl in the early and mid-1960s, probably dancing to rock and roll. There are other recollections of seeing early performances by Vallejo's greatest musical export, Sylvester Stewart, later to become famous as Sly Stone, and that suggests that the Dream Bowl's history of providing all sorts of music for different audiences remained intact.

Napa Town and County Fairgrounds, Summer 1967
As rock music expanded beyond the confines of San Francisco, teenagers in the surrounding communities got interested. In the Summer of 1967 there were a series of concerts at the Napa Town and County Fairgrounds (at 575 Third Street), probably in the building now called Chardonnay Hall. The Grateful Dead (May 29), Country Joe and The Fish (June 15 ), Big Brother and The Holding Company (June 30), Quicksilver Messenger Service (uncertain) and Blue Cheer (uncertain) all seemed to have played that Summer, often on weeknights.

The Grateful Dead show seems to have been the first of the Fillmore invasions. The show went off without a hitch, but Napa was still quite rural, and when Country Joe and The Fish played two weeks later, some local toughs looking to "beat up hippies" ended up punching out Bruce Barthol and Barry Melton (the local toughs were apparently notorious). When Country Joe and The Fish put out a "board game" as part of their second album, one square said "Napa: You Lose" thus immortalizing the event in a tiny sort of way.

The San Francisco rock community was quite small, however, and when Big Brother played two weeks after the Fish, a few Hells Angels rode up with them and hung around the stage. The local toughs did not choose to harass the band.

I do not know of any interesting rock concerts in Napa in 1968. As the rock market got bigger, more and more Solano and Napa teenagers simply drove to the Fillmore or Avalon. There were a few interesting local bands, like Project Hope, but they were not major Bay Area acts. It does appear that the "false Moby Grape" played there (too long a story to go into here), and its possible that Blue Cheer was in 1968 rather than 1967, but the Napa Fairgrounds seem to have been sized out of the rock market.

The Dream Bowl, 1969
I do not know who was promoting psychedelic rock concerts at the Dream Bowl in early 1969, but it seems a logical progression for the venue. Since it was already a music venue, no special permission would be needed to change the musical lineup. And since it was relatively isolated (as near as I can tell), any noise would not be a bother. It appears that the parking lot had been a teen hangout on weekends anyway, so a mere change in entertainment was probably not so big a change for the community, even if they might not have approved of long haired hippie music.

One unseen hand in rock music in the Greater Bay Area in 1969 was the Millard Agency. The Millard Agency was part of Bill Graham's empire, but they booked talent into different venues rather than promoted concerts. An old Federal Law prevented band managers from acting as booking agents, so Talent Agents acted as middlemen, taking a fee for finding bookings for bands by providing acts for promoters. The Millard Agency, as far as I know, was spearheaded by two agents, Paul Barratta and Barry Imhoff, but there must have been other agents as well.

A look at concerts around the Bay Area in 1969 shows the ubiquity of Millard Agency clients. The Millard Agency had a relationship with the Grateful Dead (involving paying back a $12,000 loan from 1968), but the agency also booked Santana, Its A Beautiful Day, Elvin Bishop, Lee Michaels, Cold Blood, AUM, Sanpaku, Country Weather and Frumious Bandersnatch. Although some of these acts are quite well known now, in early 1969 Santana, IABD and Elvin Bishop did not yet have records. Nonetheless all the Millard bands played small and middle sized venues around the greater Bay Area--High School and Junior College gymnasiums, rock nightclubs and outdoor events.

By 1969, rock was big business and fans would make great efforts to see the biggest bands at the Fillmore West. Yet not everyone was able (or willing) to drive to San Francisco, so some of the second tier Fillmore bands could play outlying areas and bring the Fillmore cachet with them. Famous as the Grateful Dead are today, they were not nearly as popular as Janis Joplin or the Jefferson Airplane, so they too played the outlying areas.

The first month of Dream Bowl bookings, on the poster above, is dominated by Millard Agency acts: The Dead, Santana, IABD, Country Weather, Sanpaku and Dancing Food and Entertainment (with Tom Glass and Naomi Eisenberg) were all Millard acts. This seems like a conscious strategy to create a whole new paying venue for the Agency clients. It seems like a great idea, too, but it appears to have been about two decades too early. Other than an April 25-26 show with The Sons of Champlin (who came through the West-Pole Agency, not Millard), the Dream Bowl seems to have disappeared as a music venue of any sort. Either Napa and Solano Counties lacked the population, or the Dream Bowl wasn't a pleasant place to see a rock band, or both. Without direct eyewitness memories, its hard to be certain. One of the few eyewitnesses suggests that the March 1 Santana concert was the last one. I do recall seeing a Sons of Champlin poster for the Dream Bowl on April 25-26, but that is no guarantee it actually occurred.

Update: A Commenter reports that the April 25-26, 1969 Sons Of Champlin show did indeed occur. The billing was Sons Of Champlin/Rose/Amber Whine. Rose was a Marin County band, who were friendly with some members of The Sons. The fact that the April show occurred lends even more mystery to the history of the Dream Bowl, since it didn't quite close after the March shows.

Now, of course, Napa and Sonoma are both world-famous wine-growing regions, with wealthy residents and free spending visitors; the new town of American Canyon and Vallejo itself have expanded substantially (probably too much, for the moment, but that's a different issue) and nearby attractions include the Marine World Park and nearby Infineon Raceway (formerly Sears Point). A rock venue that presented Santana, Its A Beautiful Day or the Grateful Dead would be welcome indeed by people in the region, but the moment seems to have passed and left only a furniture warehouse.

A number of questions still remain:
Anybody with insights, corrections, speculation or recovered memories (real or imagined) is encouraged to Comment or Email me.
Posted by Corry342 at 1:45 PM