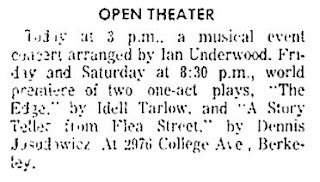 The Open Theater in Berkeley, at 2976 College Avenue (at Ashby) in Berkeley, was only open for a short period from September 1965 through March 1966. It was an important part of the Berkeley/San Francisco underground, and despite its brief history is still recalled for both the public debut of Big Brother and The Holding Company and significant contributions to San Francisco's Trips Festival (January 21-22-23, 1966). However, a little known facet of the Open Theater was Ian Underwood's critical role as one of the principal musicians of the troupe.

Ian Underwood was a conservatory trained musician who played piano and alto saxophone, among many other instruments. He saw The Mothers of Invention at the Garrick Theater in Greenwich Village in 1967, and introduced himself to Frank Zappa, who after hearing him play promptly signed him up as a Mother. Underwood was one of Zappa's principal musical collaborators from then on, appearing on numerous classic albums through 1973 (including Uncle Meat, Hot Rats and Waka Jawaka, to name just a few). Ian Underwood's wife, the former Ruth Komanoff, a formidable percussionist, was also a key member of The Mothers in the mid-1970s.

In 1965, however, Ian Underwood was part of the Open Theater. The Open Theater had been started by Ben and Rain Jacopetti, dropouts from the UC Berkeley Drama Department. It featured all manner of avant-garde performances: besides new plays, there were also musical performances, an art gallery, spontaneous happenings, and music. The Open Theater opened on Thursday, September 30. Throughout the balance of 1965 and the beginning of 1966, they presented new dramas on Friday and Saturday nights, and on Sunday afternoons at 3:00 pm they had "spontaneous happenings." In some listings, Ian Underwood's band The Jazz Mice are listed as the music for the happenings, and in the listings above (from the Theater section of the Oakland Tribune from Sunday November 7, 1965) Ian Underwood himself is named. Sometimes no musicians are listed--it seems that each "happening" was a miniature Trips Festival of sorts, with music, lights, dancing and who knows what else.

The Jazz Mice were a trio, with Ian Underwood on piano and Tom Glass on bass. I have not been able to determine the drummer, but Chicken Hirsh may have substituted with the group on occasion. Tom Glass was also one of the artists at the Open Theater, and a large Pop-Art painting of his was in the lobby. Glass's Nom Du Poster was Ned Lamont, under which name he did a few San Francisco rock posters. He also ended up leading a group called Dancing Food and Entertainment later in the 1960s (he's also a really nice guy, but that is outside the scope of this blog). The Jazz Mice played many underground Bay Area events, most famously the Trips Festival, where they played the first night (The Dead and Big Brother played Saturday, the next night).

There were also periodic musical events at The Open Theater. Besides the occasional rock show, some more avant-garde activities took place. On Saturday, January 22, the night after The Jazz Mice appeared at The Trips Festival, the Theater presented a work by Shinichi Matsushita, who is described as "Japan's foremost composer." The article goes on to say

The program consists of a single piece "Hexahedra" for piano and percussion lasting two and a half to three hours without pause. The audience is invited to come and go as it wishes during the performance. Performing will be Robert Moran,  Ian Underwood, and Jim Messinger.

While the scope of Frank Zappa's music would be hard to top, its clear that Ian Underwood had been doing very interesting things prior to joining the Mothers. Ben and Rain Jacopetti left the Open Theater for unknown reasons, around February of 1966. Management of the Theater seems to have devolved on to a sort of collective, and when the Open Theater closed, Ian Underwood was quoted as a representative of the Theater, saying they were looking for cheaper space. The Jazz Mice continued to play around the Bay Area through at least the end of June, but it appears that Ian decamped for points East sometime later, for his fateful meeting at the Garrick.
Posted by Corry342 at 2:00 PM