The Geary Temple is a little-known rock venue on the 1800 block of Geary Boulevard, just two buildings away from the famed Fillmore auditorium. It was used for a number of curious shows in 1966, and once in 1967, and then a series of uses until it achieved infamy as the San Francisco headquarters of Jim Jones notorious Peoples Temple, who sadly committed mass suicide in Jonestown, Guyana on November 18, 1978.

There were three significant buildings on the South (odd numbered) 1800 block of Geary Boulevard. The most famous to rock fans is of course the Fillmore Auditorium at 1805 Geary, on the corner of Fillmore and Geary, built in 1912 (as The Majestic Hall and Dancing Academy) and still operating today. Next door was the former site of the synagogue for Temple Beth Israel, an early Jewish congregation in San Francisco, founded around 1860, which began constructing its fifth building at 1839 Geary in 1905, although its completion was interrupted by the April 1906 earthquake .  Next to the synagogue was the Scottish Rites (Masonic) Temple Building, known as the Alfred Pike Memorial Temple, at 1859 Geary, which dated back to the 19th century. A remarkable photo exists from right after the 1906 San Francisco  earthquake, showing a damaged Beth Israel synagogue and the equally damaged Masonic Temple, with an empty lot where the future Fillmore would be built a few years later. Although there were a number of different addresses on the block, these three buildings were the main structures on the block until the 1980s.

Whatever the exact history of the Scottish Rites Temple, it appears to have been simply another building for rent in the 1960s. The Fillmore district was a neighborhood in transition in the 1960s, and many buildings, including the Fillmore Auditorium, were available for very modest prices to any customer. In 1966, there were a few interesting events at the Geary Temple, and the posters locate the building as "next to the Fillmore." While not technically correct--Temple Beth Israel (at 1839 Geary) was actually next to the Fillmore, between the two structures--for anyone trying to get to the Geary Temple, "next to the Fillmore" sufficed for an accurate direction.

Once Bill Graham had shown that underground rock events could be a commercial success in San Francisco, there was a scramble to find events and venues that filled a need. The first event I am aware of at the Geary Temple is the event presented by 'The Sacred Cow' on April 2, 1966 (above). The listing would be

The name Sacred Cow would turn up again (in Santa Cruz the next year, on March 25, 1967) but its hard to say if there was a connection between the naming. In any case, this seems to be an effort to produce a show independently. Quicksilver Messenger Service had already promoted shows of their own at the Fillmore (for example, on February 18, 1966) and Big Brother was managed by Chet Helms, who had not yet opened the Avalon (it debuted April 22, 1966), so whomever Sacred Cow represented, it promoted bands who were not yet assimilated to working as bands for hire for Bill Graham Presents.

Quicksilver Messenger Service played The Fillmore this same weekend, on Friday April 1 (the day before), opening for Jefferson Airplane. I believe there is a poster showing QMS playing the Fillmore on April 2 as well (I am not a poster expert), but it appears that they were replaced by The Hedds, a popular San Francisco garage band. In any case, with a blossoming underground dance emporium, Bill Graham can not have been pleased at the idea of a hall available to competitors just two doors away.

I do not know who or what Mira Dasein was. Robert Scheer, however, was a Ramparts magazine writer who was running as the Anti-War candidate in the Democratic primary for Congress in Berkeley. "VDC" stood for "Vietnam Day Committee," the principal organizing umbrella for anti-Vietnam War protests in Berkeley. Whatever Mira Dasein referred to, this was a fundraising event for an Anti-Vietnam War candidate to raise consciousness about opposing the Vietnam War, and there was a distinctly Berkeley tone to the proceedings.. A careful reading of the poster, however, makes it clear that this event is an Acid Test, if not referred to by that name. LSD was still legal in California at the time, so although the police would not have liked it, there was no legal barrier to having an all-night LSD party to raise funds for political purposes.

Although the performers are not world famous, except perhaps for San Francisco's Charlatans, many had Berkeley connections. Solomon Feldthouse would go on to achieve legendary status in the group Kaliedoscope, and performers like Robbie Basho, Perry Lederman and Ken Spiker were well-known at Berkeley's Jabberwock folk club. PH Phactor Jug Band were from the Northwest, but they were well known at folk clubs like Cedar Alley, as was Malachi. The Open Theater was a progressive Berkeley Theater troupe, closed by this time but still locally known (or at least infamous). The Merry Pranksters needed no introduction by this time, and Elias Romero and Ben Van Meter were local underground filmmakers.

This event sounds quite fascinating, but of course other than the posters, no other evidence has surfaced from the event. In any case, anyone who went or participated may not remember it. On top of that, it wasn't even the coolest event on the block--that same night Andy Warhol's Exploding Plastic Inevitable, feauturing the Velvet Underground, appeared at the Fillmore, with The Mothers of Invention on the bill, not to mention the Leaves and the Grass Roots at the Avalon and Van Morrison in San Leandro (at the Rollarena), so it was some weekend for rock fans in the Bay Area.

Although I know nothing of the "Mira Dasein" benefit beyond the poster above, the fact that a similar event was held the next month suggests it must have been some kind of success. This event, entitled "Reaktion Harvest-An Experience" does not appear to be a Benefit at all, but rather a commercial event. While the acts are slightly different than the previous event, there is an even more pronounced Berkeley flavor. Country Joe and The Fish had just "gone electric", and were still mostly playing the Jabberwock. The Jazz Mice Septet were a larger version of the house band at The Open Theater, featuring Open Theater Musical Director Ian Underwood (before he went East and met Frank Zappa) and bassist Tom Glass (aka artist Ned Lamont).

Bill Graham can't have missed the fact that a rival could lease the hall down the block and eat into his audience before he'd even got off the ground. While I do not know the exact timeline of Graham's activities, I do know he had a particularly Bill Graham-like solution: he bought the Geary Temple. A brief article in the May 3, 1969 edition of Music Industry trade magazine Billboard notes that


Bill Graham sold the Geary Temple next to his old Fillmore Auditorium to Western Addition Youth Group, Inc., a self-help for ghetto teenagers for $166,000, although another bidder was willing to pay $175,000

Whether or not the detail about a higher bidder is true--since Graham must have been the one to tip Billboard, he may have had any number of motives for fudging the facts--by 1969 Graham cannot have been too concerned about a competitor near his old site. By that time, Graham had moved from the Fillmore to the Fillmore West, a dozen blocks and a mile and half away.  In any case, the Billboard notice shows that Graham owned the Geary Temple, and that accounts for the abrupt absence of any shows at the Geary Temple from 1966 onwards, with one exception that I will identify.

My general understanding is that the Jefferson Airplane used the Geary Temple as a rehearsal hall for much of the late 1960s. Various stories abound of Jimi Hendrix, Paul McCartney or Mick Taylor hanging out or jamming with the Airplane, and if they were making music it was probably at the Geary Temple. The Airplane's San Francisco base was their "mansion" at 2400 Fulton, near the Haight Ashbury, but while some members lived there, it mainly held offices. There was some room in the Mansion to play music in the basement, but it was not a real rehearsal hall. It was standard practice for touring bands from England to come to San Francisco to play the Fillmore and spend their days jamming with the Dead or the Airplane, depending on who was in town. Any jams with the Airplane would have taken place at the Geary Temple, adding another historic facet to the building. 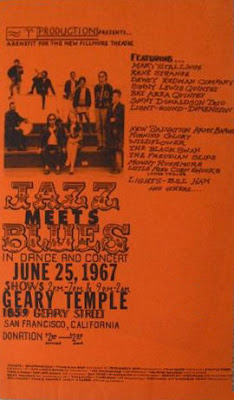 There was one more musical event that I am aware of at the Geary Temple, on June 25, 1967 (h/t Ross). It was billed as "Jazz Meets Blues: A Benefit For The New Fillmore Theater." The show featured a mixture of rock and jazz acts. The billing looked like this

My theory is that Bill Graham already owned the Geary Temple by mid-1967, and that this was a community event. The Fillmore Auditorium itself would not have been available, since Jimi Hendrix and Big Brother were finishing out their week (Big Brother had replaced the Airplane), so I am assuming Graham offered the Geary Temple building instead. The Fillmore District had a lengthy musical history of its own, well told in a fine book called Harlem Of The West by Elizabeth Pepin and Lewis Watts (2006, Chronicle Books), but too extensive to go into here. Suffice to say, the district's musical history was largely African American and Urban Redevelopment was changing the neighborhood. The white hippies who patronized the Fillmore were friendly enough, but they weren't from the local community. Graham always made a point of respecting the fact that his clientele were "visitors" in the neighborhood, so whatever the New Fillmore Theatre might have been, the "Jazz Meets Blues" theme seems to suggest it was a local event.

Following my assumptions, Bill Graham appears to have bought the Geary Temple by 1967, and sold it by early 1969 when he no longer had neither a direct need for it nor active fear of competition. Jim Jones and his "congregation" purchased the property at 1859 Geary in about 1973, paying $122,000. While they played an increasingly important part in San Francisco politics, Jones became increasingly erratic, and eventually left with many of his followers in 1978 for Jonestown, Guyana, where the terrible tragedy occurred.

After the Jonestown event, the building remained empty. It was seriously damaged in the 1989 Loma Prieta earthquake and torn down. It remained a vacant lot for a long time, but has since been replaced by a United States Post Office branch office.
Posted by Corry342 at 4:27 PM