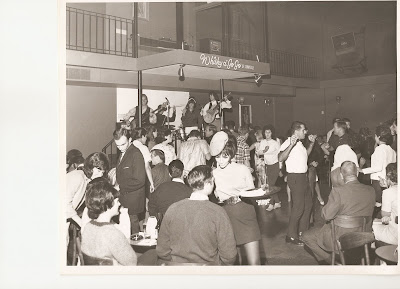 Elsewhere I had speculated about a nightclub in the San Jose suburb of Sunnyvale called Wayne Manor, a unique "Batman" themed dance club. This speculation lead to some amazing information about the choice of the Batman theme for the club, as the son of the owner explained that as an 11-year old who liked Batman comic books, he persuaded his father to remake the club into a sort of Batcave, complete with waitresses dressed as Bat Girl. With this inspiration, Ross and I have an interesting page on Wayne Manor, complete with a somewhat complete list of performers from the club for about a year (mid-1966 to mid-67).

The most startling piece of information we learned, however, was the prior incarnation of Wayne Manor: a Sunnyvale "franchise" of West Hollywood's famed Whisky A Go Go. Initially, I found this too unlikely to believe, but lo and behold, here is a photo from the nightclub's opening, with "Whisky A Go Go- of Sunnyvale" clearly visible above the bandstand. We had originally thought that the band was a combo called Sandy And The Vikings, but an infallible expert assured us included Bob Mosley on bass, two years before he joined Moby Grape. Mosley himself looked at the photo, and identified singer Joni Lyman, guitarist Joel Scott Hill and drummer Johnny Barbata, so this was in fact the Joel Scott Hill Trio, who were regulars in Northern California clubs at the time.

Apparently, the club only used the name Whisky A Go Go from mid-1965 until about February 1966, when it adopted the Batman theme and changed its name to Wayne Manor. Apparently the club advertised for Go Go dancers in the San Jose State student newspaper when school opened, but the exact opening date of the club remains uncertain. Since we have addressed the interesting nature of Wayne Manor, I am using this post to consider what this new information tells us about the history of the Whisky A Go Go.

The West Hollywood Whisky A Go Go was founded by Elmer Valentine (1923-2008), a former Chicago policeman. The story goes that while in Chicago, Valentine ran nightclubs for "The Mob," and he was "on the take" from them as well. He left Chicago in the early 1960s because, apparently, he could not remain there. He was running a restaurant in Los Angeles, but took a trip to Paris where he went to a nightclub called The Whisky Au Go Go where young people were dancing, and he took the idea back to Hollywood.

The Whisky A Go Go opened at 8901 Sunset Boulevard on January 11, 1964 with Johnny Rivers as its featured attraction. The serendipitous innovation of the Whisky was to have pretty girls in fringed miniskirts dancing to the music on elevated "cages" above the audience. The Whisky A Go Go became a place to see and be seen, Johny Rivers became a huge star, and "Go Go" dancing became a nationwide craze, so much so that Smokey Robinson wrote a hit single about it ("Going To A Go-Go"). Imitators of the Whisky A Go Go sprung up on the West Coast and around the country, as exciting rock music from England and later America gave teenagers and young adults something fun to dance to.

As West Coast music exploded from 1966 onwards, the Whisky was well positioned to book legendary bands on their way up, most famously The Doors, but also including Buffalo Springfield, Jimi Hendrix, Steppenwolf  and numerous others. The Whisky had live music 7 nights a week, and only paid bands Union Scale (headliner or opening act), but it was such a prestige gig that every rising band wanted to play there. The rock market changed in the 1970s, but the ever-shrewd Valentine had opened the Roxy Theater and stayed at the center of the Hollywood rock scene.

The principal source for the history of The Whisky was Elmer Valentine himself. A legendary racounteur, he charmed reporters for decades, retailing his amazing stories of his pre-and-post Whisky carreer, right down to his various Mob connections (who had probably passed on by the time he talked about them). While there is no reason to think that Valentine was anything but truthful in his stories, like all good story tellers he emphasized the parts of the story he wanted to tell. In particular, as the post 1966 Whisky loomed larger in rock history, people asked Elmer about the likes of Jim Morrison, and fewer people inquired about the genesis of The Whisky A Go Go.

The Whisky A Go Go Revisited

The Whisky A Go Go in West Hollywood opened on January 11, 1964. Initially, its entertainment was designed on the Las Vegas model, open with live music 7 nights a week, generally featuring the same band. Initially the club featured Johnny Rivers, whose countryified rock made him a huge star by 1965. Rivers played the Whisky for all of 1964, and some of 1965. Other bands played too, but Rivers was the featured attraction. In April 1965, however, Valentine opened another club in West Hollywood called The Trip (at 8572 West Sunset). The Trip was oriented towards a younger clientele, and the featured acts changed with some regularity. The name acts at The Trip were a bigger attraction than The Trip itself. Over time, it appears that Valentine adopted The Trip's booking policy for The Whisky, and by mid-1966 The Trip had closed and The Whisky featured new name acts each week, sometimes every few days.

Throughout 1965, however, another entirely different business model for the Whisky seems to have been promoted, which promptly faded away, and the shrewd Valentine rarely or never referred to it and was largely never asked. In April 1965, the Whisky partnership (led by Valentine) opened a branch of the Whisky A Go Go in San Francisco, at 568 Sacramento. This club has mostly been forgotten, and I appear to be the only person doing research on it, although the Whisky site itself indicates it was definitely owned by the original Whisky partners. Over the years, there have been a variety of vague stories about Whisky A Go Go clubs in Atlanta, Denver, Minnesota and Washington, DC about which only snippets are known. According to Wikipedia, there was a Whisky A Go Go in Chicago (on Rush and Chestnut) that opened in 1958. I have never found it credible that Elmer Valentine, a connected Chicago cop who ran nightclubs for organized crime (per his own admission), knew nothing about this joint.

The discovery that there was a Sunnyvale Whisky A Go Go, that opened shortly after the San Francisco outpost, suggests an entirely different narrative. The Whisky was a very repeatable formula, and it sounds like Elmer Valentine and possibly other backers were interested in creating a chain of sorts, a kind of circuit where bands could play. Johnny Rivers success had proven that there was money to be made in the record industry, and since clubs could make money at the bar by selling drinks, it seemed like a good formula. Whatever the exact details of Joe Lewis's franchise, in mid-1965 a Sunnyvale Whisky that acted as a midway point of sorts between the San Francisco and Hollywood branches seemed like a good idea.

It was not to be. The Whisky A Go Go caught the beginning of the sixties wave, but events moved very quickly. Formulaic dance clubs were rapidly replaced by self-contained rock bands who wrote their own songs and music became "art." The Hollywood Whisky, located at one of the prime wellsprings of talent, had no problem adjusting, but even in bland suburban Sunnyvale Go-Go dancing got old quickly. San Francisco Chronicle columnist Herb Caen reported on January 31, 1966--after the club had only been open for about six or seven months--"Are the go-gos going-going? Could be: Joe Lewis has tranformed his Sunnyvale Whisky a Go-Go into a Batman cave, called Wayne Manor."

We have found some correspondence between bands playing the SF Whisky and the Sunnyvale Wayne Manor, so it seems like they shared Talent Agents. 1964 style seemed very old by 1966, however, and whatever financial arrangements may have been in place with the Sunnyvale Whisky were superseded by its transformation into a Batcave, in its new incarnation.This incarnation too would pass on, as the club appeared to become a topless joint called Murphy's Station, and the building was ultimately torn down as part of the renovation of downtown Sunnyvale.

Our tale here, however, is a lost story of an attempt to franchise the Whisky A Go Go like McDonalds. It seems that a grand scheme was hatched that did not come to fruition, so Elmer Valentine simply left the story out of his subsequent Whisky sagas. My discovery of the Sunnyvale Whisky now leads me to wonder about other such places, and how they might have been connected to the Hollywood Whisky, as well as curiosity about what partners may have been interested in creating a talent circuit of Whisky A Go Gos.
Posted by Corry342 at 6:41 PM